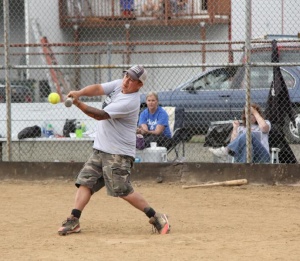 Held at the South Bend Community Park, teams played Saturday to determine seeding going into the final day of play. The team Balls Deep made it out of the first round undefeated, as their opponent for the final game, Ice Cold Pitchers, had to fight to make it to the second seed.

Drawing the top seed, Balls Deep occupied the home bench as the Pitchers we comfortable taking the first at bats.

With both teams able to place a few base runners early in the game, it was defense that held off Balls Deep for their second inning press as Ice Cold Pitchers pulled off a double play to cool the Deep heat. The game remained scoreless through the first three innings.

Stalling the Pitchers at the top of the fourth, Balls Deep ripped back-to-back double base hits to make the first mark of the championship game. A sacrifice fly and another double bagger set Balls Deep ahead 2-0.

The Pitchers countered with a single run fifth, and held tight to Balls Deep not allowing them to run away with the game. The game held with the Deep advantage and the fire from the Pitchers after being put down 1, 2, 3 at the top of the sixth, might have been the trick to start their rally. Coupled with runner interference, that proved to be the final out of the inning, Ice Cold was ready to take the game.

Balls Deep was ready for the challenge but the steady pitching and better defense held as the Ice Cold Pitchers took the game and the Labor Day Championship.

And to the winner the spoils a $70 gift certificate at Chester's where the team promptly went to celebrate.