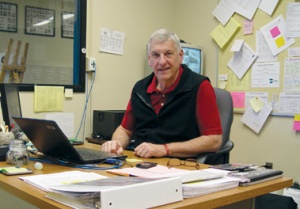 Principal Martin Huffman in his office at Toledo High School. Huffman was recently hired on a permanent basis to fill the position after serving on an interim basis this last year.

Toledo High School Interim Principal Martin Huffman has been hired on a permanent basis after a job offer was extended by the District Board Thursday night.

Huffman was hired last summer in the wake of administrative shakeups due to the resignation of former Elementary School Principal Ron Reynolds. Then-High School Principal Lisa Hull took over Reynolds’ position at the elementary school while Huffman, former Superintendent of the Lyle School District, was brought in to lead the high school on a one-year contract.

The contract was set to expire in the coming months and, upon evaluation of his performance by the board, Huffman was offered the position permanently.

"I think I’ll just continue on with what I’ve been doing and improve what needs to be improved," said Huffman after accepting the offer, stating he will continue working on programs that accompany and improve academics.

Huffman has been met with great success after starting Two Hands on the Wheel last year, a distracted driving education program where students share statistics and personal stories about the dangers of taking a driver’s attention off the road. Students with the program have since visited other high schools, community organizations and driving classes in the area and are expected to pass the torch when new students begin to enroll.

When asked what other programs may be in development, Huffman said, "There’s probably things I haven’t thought of yet," stating he looks forward to finding them out in school years to come.