Hoquiam Police prepare for any situation 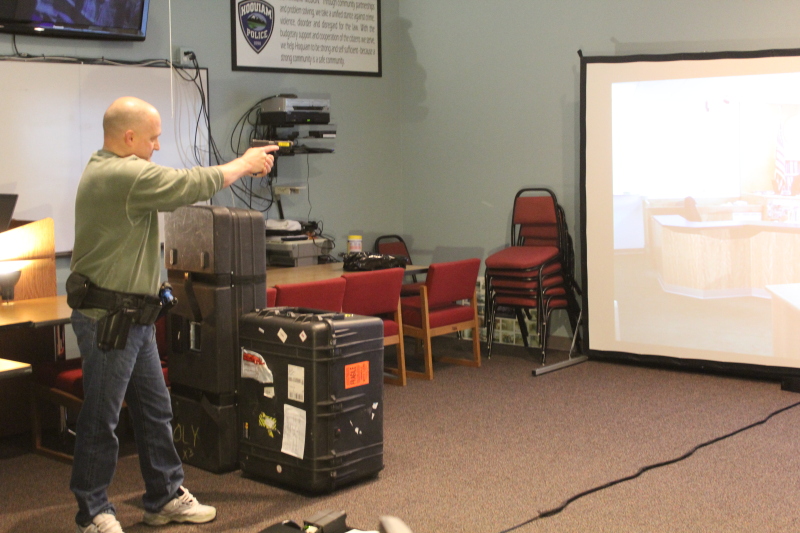 Photo by Patrick L. Myers - A Hoquiam Police Officer is poised in front of the projector, ready to respond to the next simulated threat.

For the first simulation, the technician read the officer into his "role", telling him the situation. The situation was that a transient had been loitering in a spot right outside of a building, and the owner of the building had called in a complaint to have the transient removed. The footage on the projector literally took the officer from talking with the owner, to the owner showing him where the transient had been loitering, and then the owner walked off with boxes in his hands completing his own errands. Once the owner left the officer actually called out to the transient, commanding him to show his hands, as one of the hands was obstructed from view. After the transient gave a negative response, and refused to cooperate the officer warned the transient again to show his hands and to move along or he would need to call backup. The transient began making shifty movements and after a moment brandished his pistol and began firing at the officer. The officer quickly pulled his issued duty weapon and began firing back, and a moment later the simulation was over and on the screen where the transient was freeze-framed you could see every spot that the officer would have put a bullet if the simulation were real. The officer and the technician discussed what he should have done to better handle the situation that was presented, and then they evaluated his accuracy and ruled out things that the officer should be aware of while firing the weapon to improve his accuracy.

The technician read the officer into his next simulation, he described a scene telling the officer that he was going to be in a courthouse and would hear a disturbance down the hall. The simulation began and the camera panned from inside the courthouse to down the hall as screams could be heard from a courtroom down the hall. The camera went inside the room from the hallway and then froze in front of a situation where there was a man holding a woman hostage at knife point. The officer called to the man telling him to drop the weapons and show his hands, and the man warned the officer to stop or he would stab the woman. The officer kept trying to tell the man to drop his weapons and before too long the man carried through and killed the woman. The officer had not reacted to the simulation properly, and the technician reasoned that he should've probably shot the hostage-holder. In the second run the officer underwent the simulation again after deciding the correct way to deal with this situation. After a moment of the man warning the officer, the officer warned him that he would have to shoot and then shot the man as he made some movements to go to stab the hostage. The simulation was over and they again evaluated his accuracy.

The simulations are an excellent way to put the officer in a realistic situation without putting them in any danger, and they are still able to test their accuracy without having to go to the firing range, "We thought it was a better option than to just go to the firing range and I think we've only done this once since I've been here so it's an excellent opportunity for our officers," said Hoquiam Firearms Instructor Sgt. Shane Krohn.