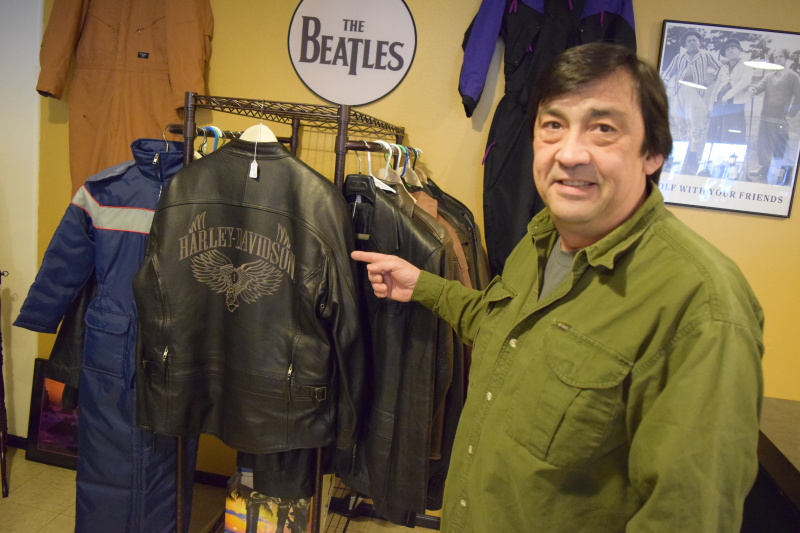 Photo by Todd Bennington - Leather goods dealer Chuck Wenham gestures to a Harley Davidson motorcycle jacket at his shop last week. Wenham's is one three shops that together make up Heron Street Attic.

Those looking for something different this holiday season would do well to check out the eclectic offerings of new downtown Aberdeen business Heron Street Attic.

The store is actually made up of three individual shops: The Leather Jacket Guys, Allen's Attic, and Vine Maple Bows and Primitive Supplies. The proprietors of the three originally met at Harbor Square Community Market, where they were all formerly located, and have now decided to branch out on their own.

The Leather Jacket Guy's Chuck Wenham, who operates his shop along with his son Robert, explained that he's in the leather goods business in part because it's a product that can be bought and sold at an affordable price.

He described his wares as slightly used, further explaining that he sources his coats and jackets mostly from those looking to sell or trade.

Motorcycle jackets are among his biggest sellers, he said, purchased by both diehard riders as well as those who just wish they were. Memorable recent sales include a pair of leather pants bought by a member of a mariachi band.

Wenham's now branching out into other areas, he stated, such as winter coats and belts, and other items on offer include camouflaged gear, sweaters, and even some children's clothing.

"This is a new beginning here," he said of the move.

Chris Melton of Vine Maple Bows and Primitive Supplies said the genesis of her shop was her husband's interest in building bows and flintknapping to create arrowheads and the business has expanded from there. It's not as much of a niche market as one might think, she indicated.

"We actually have more interest in it than I expected, because it's getting to be a lost art. It's unique and people are interested in the unique. It's new to them," she said.

In addition to supplies for those looking to learn flintknapping are items as varied as dreamcatchers and shark teeth.

The most popular sellers tend to be craft stuff, she said, such as rocks, feathers, and beads.

"We try to get as much of the authentic as we can," she said, noting that among her clientele are Native Americans looking for traditional items they can't find elsewhere.

Still, she stated she strives to have items that appeal to everybody.

Noreen Thaanum of Allen's Attic is also concerned with presenting customers with something a little special, with just about every item in her shop having some story attached to it.

Some of her wares are sold on consignment, while others are more personal, having been accumulated from friends, acquaintances, and even her own French Canadian family who relocated to the area years and years ago from Quebec.

"It's memories," she said simply of items that include quality furniture, antiques, and fine porcelain and china. "You never know what you've got hidden in your attic or your basement."

Thaanum stated she takes her business seriously and is only interested in presenting people with quality items that can't be readily found elsewhere.
"These are all things that mean different things to different people. You don't try to push something off on them that you don't feel good about yourself, because once you do that, you shouldn't be in the business," she said.

As a life-long area resident, Thaanum also indicated her keen desire to see the downtown area revitalized and businesses reemerge.

"It's kind of rewarding. It gives some people a place to go," she said of running her own shop. "I was born and raised in Aberdeen, and there's still an Aberdeen. I want people to know that. This is home to a lot of us."