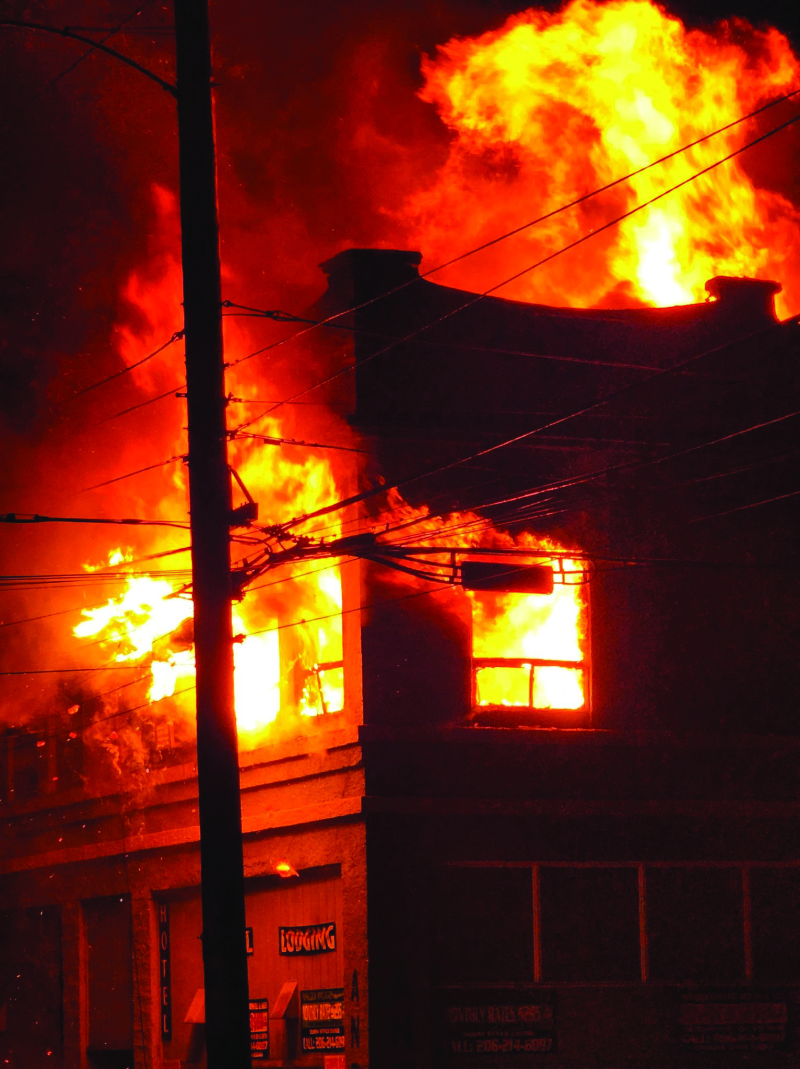 Photo Courtesy of Sara Chastain - The Haunted Hostel in Winlock went up in flames last week.

Around 7:25 p.m. on Tuesday, November 8, Winlock Fire and Rescue were dispatched to a reported structure fire at 104 SE Front Street in downtown Winlock. The Haunted Hostel, one of the last historic buildings left in the downtown area, was on fire.

There were several reports of residents in the hostel inside and in need of rescuing. Heavy black smoke and intense heat gave the firefighters difficulties while searching the second story. With the use of specialized equipment like the Self-Contained Breathing Apparatus, and Thermal Imaging Camera, the firefighters did an exhaustive search of all the floors of the building. No one in need of rescue was located within the building.

All search and rescue personnel were pulled from the interior to join the exterior teams fighting the fire. Mutual aid was received from the following agencies: Riverside Fire Authority who provided a ladder truck with crew and Assistant Chief Kevin Anderson.Chehalis Fire Department who provided an engine with crew.

As the fire spread closer to the intersection of Walnut and SE First Streets, a main power line was being threatened and Lewis PUD was consulted about cutting the power to those lines. As they are the main transmission lines for the city, cutting power at that point would cause a widespread power outage that would cause the entire city to be without power. As the fire got closer to the main power pole on the corner, PUD cut the power so that the utility pole could be saved. Fire crews were successful in saving the pole and making the power outage much shorter in duration.

The residents of the hostel were all accounted for and moved to lodgings in the Chehalis/Centralia area by the American Red Cross.

The fire was finally brought under control and units were released in the later morning hours of Wednesday, November 9. Nine pets perished in the fire, but all the residents were safe.

Winlock Fire Chief Richard Underdahl stated, "The actions of Lt. Jacobson, FF Newberry and other entry teams looking for residents in that building were heroic. They braved intense heat and blinding smoke to make sure that everyone was safe and placed themselves in immediate danger. I am very proud of all the firefighters on scene."

"All of my off-duty firefighters came to the fire except for one, who was in Eastern Washington," said Underdahl. "Lt. Ray Smerek, Lt. Jarryd Forler, FF/EMT JP Blum responded and stayed for the duration. Their help and dedication is greatly appreciated. I want to thank all of the Lewis County fire agencies who responded to help during this event. All teams worked closely together and were able to keep the building standing."

"Thank you to the City of Winlock for all their assistance," Underdahl continued. "Police Chief Stephen Valentine, who kept the growing crowd back, Water and Superintendent Rodney Cecil, who kept the water flowing, Public Works Superintendent Kenny Simpson and his crew that assisted with traffic control and Mayor Brandon Svenson who was there during the entire incident offering assistance. Please support the American Red Cross! They responded with Twin Transit to assist in relocating the displaced residents. Their assistance was greatly appreciated! Thank you to the Lewis County Sheriff's Office for their assistance with traffic and crowd control."

Underdahl stated, "Thank you to the citizens of Fire District #15 for your support! Again, by voting for the lid lift last year allowed us to hire a Firefighter/EMT. If that had not passed, Lt. Jacobson would have had to respond by himself. I am grateful to the citizens of this community who see the value in their fire department!"

A Fire Investigator from Chehalis Fire Department arrived and conducted a preliminary investigation. The fire is currently under investigation to determine cause and origin. Traffic is being rerouted in downtown Winlock for the next 6-8 weeks so they can tear down the building and keep the other surrounding buildings safe.