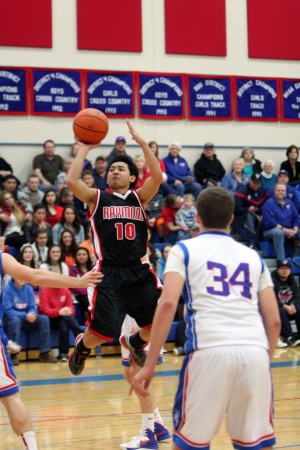 MENLO – Raymond won the Pacific League championship for the second straight season by defeating Willapa Valley on its home court 59-52 last Tuesday (Jan. 29) before a full house at Tenoski Gym. The Seagulls used good balance and depth to fight off early foul trouble. Carte Bisbee tallied 17 points, grabbed eight rebounds and made three steals, and Marvin So sank 11 for the Seagulls (16-4, 11-1). Bisbee banged in eight of Raymond’s last 10 points.

The two rivals now head to the District IV tournament with first round byes. The No. 1 seeded Pacific league Gulls play the winner of Adna/Ocosta Saturday, while Valley locks horns with the Wahkiakum/Winlock winner, also Saturday to be played at Montesano or Rochester.

“It felt good to be able to repeat as Pacific League champions,” Raymond head coach Mike Tully told the Herald. “We knew at the beginning of the year that we were the team with the target on our back, so to be able to repeat despite a couple injuries to key seniors, Alec Oatfield and Marcus Lundy, it was pretty special. This group of guys has worked hard to get to this point, and now we can look forward to a very tough district tournament.

“In a Raymond-Valley game, you always expect both teams to give everything they have, and with a league title at stake that was definitely the case,” Tully said.

“It was a heck of a game – two teams really going at each other,” Willapa Valley head coach John Peterson told the Herald. “Our kids played really hard, and their kids played really hard. It was a great crowd on both sides. I told the kids before the game that you don’t get to play in games like that all the time. I wanted them to enjoy the experience.”

“We were able to get a bit of a lead early and every time we would push the lead up to 10 points or so, Valley would go on a run, but we were able to get enough stops defensively and make enough free throws to pull away in the final minutes.

“I think the big difference in the game was our rebounding,” Tully noted. “We finished the game with 23 offensive rebounds. Those second chance opportunities were huge for us. Valley did a really good job of taking care of ball and handling our pressure.”

“Carte Bisbee came up huge for us, as you would expect from a senior leader,” Tully said. “Carte had eight points in the final period, despite picking up his fourth foul late in the third quarter. Fellow senior Andrew Hamilton was strong on the boards.”

“The guy that hurt us was Carte (Bisbee),” Peterson said. “It was a pretty even game. They have good players and our guys matched right up with them. “We played pretty well. You always hate to lose. I can’t think of one kid who didn’t give 100 percent. If the kids try really hard, I can live with that.”

The Gulls upped the margin to 28-21 at intermission. Both teams scored 18 points in the third quarter as RHS took a 46-39 edge entering the final eight minutes. Raymond’s biggest lead was 11 at 44-33. Each team put in 13 points in the fourth quarter. The Vikings (15-5, 10-2) pulled to within two points (49-47) about midway through the fourth quarter. Bisbee’s airborne putback put the Gulls safely ahead (54-48) with about a minute and a half to go. “That reverse layin over his head shot by Carte was told me that school was out at that point,” Peterson said.

“Raymond hurt us on the boards,” Peterson noted. “We gave up 15 offensive rebounds. You can’t do that and expect to win. We don’t usually give that many. We shot 22 percent in the first half.”

“The Central League is a pretty darn tough league,” Peterson said. “District is going have some battles. Anyone can beat anyone. High School kids are still high school kids. One of goals heading into the season was to try and win league and if not, at least finish second and get a first round bye (at district). We’re excited about it. I love tournament time. I hope we can continue to play well. Now it starts over.”
Read more from: WHH - Front Page
Related Articles:
Tags: None
Share:
Copyright © 2017 by
Powered by Bondware
News Publishing Software