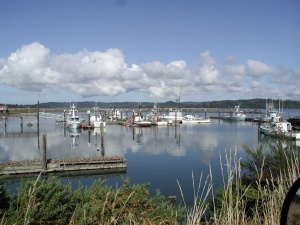 Photo courtesy of Rebecca Chaffee Godwits line the breakwater float at the Tokeland Marina. A master plan has been produced for the redevelopment of the marina in Tokeland.

The project came about through the query of a local birder who wondered what would become of godwits – a shore bird that finds refuge at the marina – if the old floats were to be removed. Those attending a 2010 Tokeland/North Cove Chamber of Commerce meeting decided to ask Rebecca Chaffee, manager at the Port of Willapa Harbor, and a representative from the Grays Harbor Audubon Society to provide some answers. (See April 24th article about the Tokeland involvement.)

Over the next several months, the community became involved in taking a look at short- and long-term goals for their area. As a result, the community will see vast improvements in the marina locale, beginning in 2014.

Chaffee’s involvement in the process has been extensive, and she is as thrilled at the plans and progress as the Tokeland citizens.

Top priorities included marina improvements, which fell under the auspices of the port. Originally, “we focused on recreation – public restrooms, landscaping, parking, some transient moorage – because all that was fundable through a Recreation Conservation Organization (RCO) grant,” Chaffee said.

“Then out of the clear blue, we had an opportunity to apply for this CERB (grant), and they are focused more on the economic vs. recreation. So then we added the component that we hadn’t included in the RCO grant, because it wasn’t eligible – the commercial pier, which is also falling down, and replacing that café building with some sort of commercial building.”

She described the CERB – Community Economic Revitalization Board – grant as a “once in a lifetime” opportunity. The 2012 state legislature set aside $12 million to be awarded to communities for economic development and revitalization. The Port of Willapa Harbor was one of only 10 entities approved for CERB funding; the port will receive $500,000 for the Tokeland redevelopment through this unique offer.

“We had an opportunity to apply for a federal grant that is called Rural Business Enterprise Grant (RBEG), and that one we really honed in on funding for the building,” Chaffee said, referring to plans to replace the old café.

A spur off that idea is to provide an “incubator” atmosphere for vendors, “to help them with things like online marketing and other business practices, to try to help them grow beyond just selling four jars of jams.” For instance, Westport Winery is working with Tokeland’s Nelson Crab Company to have specialty labeled wines for the community.

Each new facet adds interest, Chaffee said. “That, to me, is a fun little twist to the marina.

“Sometimes these grants guide you in a direction you may not want to go, but sometimes they make you hone in on what you could do not only to attract their funding, but also to make it a more interesting project.

“The USDA really liked that because they have been in rural communities and have seen the need for a commercial kitchens. It fit with what they wanted to do and it made us think in more detail about what we wanted to do. So it kind of came together.”

Construction on the marina redevelopment likely won’t begin until next year, partly because of the funding process. For instance, Chaffee doesn’t anticipate getting the RCO funds ($665,000) until late summer or early fall since the state budget hasn’t been approved yet.

“A major piece of that project is one structure that acts as a breakwater but also as a transient float in the summertime. That’s going to be made off-site. It’ll take six months to get it. What I’m hoping to do is this fall order the float and then it would be delivered to us next construction season.”

In the meantime, “I’m trying to juggle having time to accumulate more local match, like this USDA money and some more local sales tax money, and I just got the opportunity to apply for more federal grant money.”

Once started in 2014, the port must complete work within two years. “I don’t know that it will take two years, but it might. We’re going to do a lot of the work ourselves, because we can use our own labor as match,” she noted.

Local contractor Mike Dennison, hired as a port employee, will oversee much of the work. More local hires are expected as the project develops.

Port responsibility for the Tokeland marina goes back to 1928, although “the marina has been there in some form probably since the early 1900s,” Chaffee said.

“Working with the Sustainable Tokeland (group) was tremendously helpful,” she said. “One, you get a better project when you get so many people to help. Then, when you go for funding, you have that documentation of community involvement. It was really important that we had that participation.”

She plans to continue searching for funds for further developments. While CERB funds probably will not be available again, RCO grants are available every other year. “I’d like to do a Phase 2 and apply for additional funds for more shoreline erosion (control), do a sewer pump out, make another transient dock. It would be nice to get that done. The marina really hasn’t had any improvements in who knows how many years.”
Read more from: WHH - Front Page
Related Articles:
Tags: None
Share:
Copyright © 2017 by
Powered by Bondware
News Publishing Software