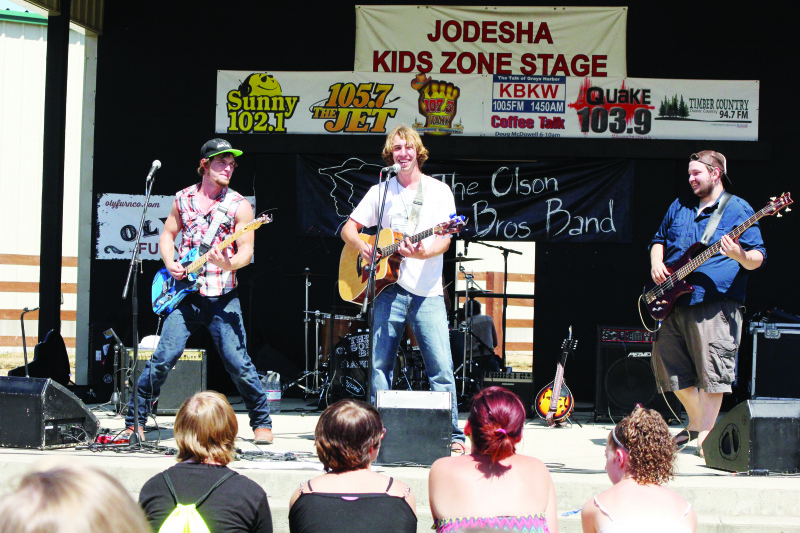 Acts like the Olson Brothers filled the stands at the outdoor stage. With their growing popularity Olson Brothers Band fans show up to support the local brothers as they start to make their mark in the music world.

With the one day of ran it was enough to put the Grays Harbor Fair just off their record pace for attendance this year.

Grays Harbor Fair Manager Mike Bruner is still happy with the line up of entertainment that was available and the showing at the fair for 2015.

"You have to focus on the things that you can control, and weather is not one of them," said Bruner.

The rain fell on the one day that many take the opportunity to catch the show at the Grays Harbor Raceway, the subsequent concert did happen, albeit a little wet for those who braved Grays Harbor conditions.

When all was said and done, this was the fourth year in recent history that the fair brought in over 60,000 in attendance. With a final total of 62,533 Bruner reports that the numbers were off just 4,500 from last year, the current record year for attendance.

"With people not showing up for the races we saw a small dip in attendance. Prior to that the numbers were on par for another record year."

Bruner also noted that with the focus on the entertainment, which he touts as very strong performances this year, he also gave high marks to Predators of the Heart and Big D and Bubba working the Redneck Olympics.

The Youth Livestock Auction had a great year bringing in $117,000 from 55 area students showing sheep, hogs and cattle.

"Not every year can be a record year," said Bruner, "But we work to bring in the best shows we can year after year."

With the enthusiasm that was witnessed at the fair, it is clear that the people who attend the fair are having a good time with smiles all around, kids screaming on the rides and parents laughing with their kids as they watch them enjoy the thrills and spills at the Grays Harbor County Fair.