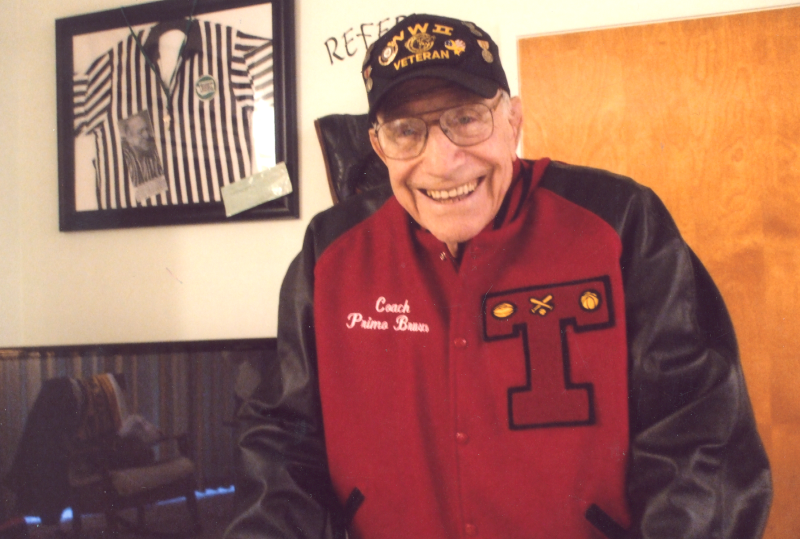 Primo in his Toledo jacket.

Francis "Primo" Brusco (93) passed away on January 14, 2016 at the Hospice Care Center in Longview.
Primo was a teacher and coach at Toledo High School from 1949 to 1955. Basketball was his favorite sport and he was a referee for over 30 years for high school and college games.

Many people still remember Brusco from his teaching days.

"When I was a little kid, we lived across the street from "Primo" Brusco, on Salmon Creek Road," reminisced Butch Hayrynen. "While other kids rode the bus I got to ride to school with him. Our parents were even friends. He turned the sports program around in Toledo. Back then one person coached all the sports. Brusco cared for players off the field and was like a second father. He cared for the players, the water boys, the cheerleaders, and even those that couldn't play. He was the one person that was invited to all the class reunions. After he quit coaching, he officiated at the district and state basketball tournaments and was a bundle of energy. He was the first "Big Cheese" that Toledo ever had. I played for him as a freshman and sophomore. He liked us as individuals way beyond sports."

"The things I remember about Brusco are that he was his own person, not a copy. He had his eccentrics like chewing 2-3 packs of gum when he coached and also had his superstitions," remembers Earl "Punky" Omeg. "He was emotional and into the game quite a bit. My sophomore, junior, and senior year, he had good teams. He influenced people to be successful. He also had a tremendous sense of humor. He and I kept in contact all the time. When I coached in Kittitas, Onalaska, Rochester, and Yelm, he came and watched my teams at least once. My best memory of him was the fact that he was so tremendously loyal to the people that played for him."

A scholarship fund to honor him has been set up. Donations can be mailed to Primo Brusco High School Sport Scholarship,Toledo High School, PO Box 469, Toledo, WA 98591 or at St. Mary's Church, 2200 Allen St, Kelso, WA