Godiniho Thrives in a Culture of Wrestling at CR High School 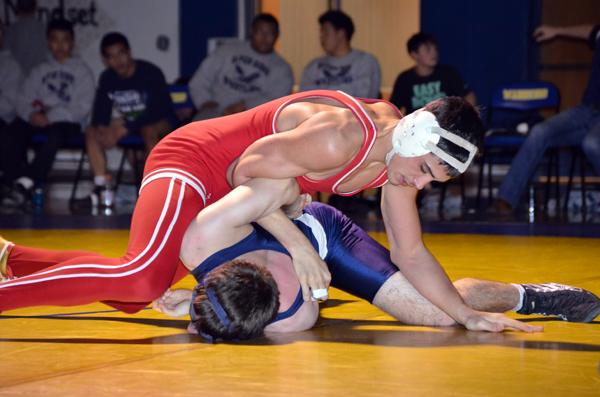 It should be no surprise that Castle Rock senior Shawn Godinho will be wresting this weekend for a trip to the 2015 Mat Classic in Tacoma next weekend. In reality, Godinho is one of the guys to beat if someone else earns the state title at his weight class of 152 pounds.

"My goal this season is to be a state champion and help the team bring home a team trophy at state," said Godinho matter-of-factly.

If that name sounds familiar, it should. He has had several brothers; all of them wrestlers that played others sports at Castle Rock High School. If that weren't enough, his father, Joe Godinho is the Head Wrestling Coach at CRHS.

It can be tough on young athletes when their dad is a local legend which is what the elder Godinho will be considered in dinner conversations when Castle Rock wrestling is discussed decades from now.

"We normally don't consider him a legend, we just think of him as "coach", commented the younger Godinho. "Even if we don't admit it, all the upperclassmen know how great of a coach he really is."

With a wrestling coach and several state caliber wrestlers living in the house, one has to wonder about life in the Godinho family.

"We do talk about wrestling quite a bit at home," said Shawn Godinho. "Whether it is about one of my matches or someone on the team, he is always trying to help his wrestlers improve."

In the meantime, Shawn is destined to have a solid run toward the state final match. Last week, he cruised through the Trico League meet and qualified for the regional this week in Hoquiam. Regardless, Godinho has dominated most of his competition this year and appears to be a young man on a mission.

"I think the confidence is just coming with age and experience," he said. "I've have been learning new stuff in wrestling camps over the summer and wrestling with my brothers either at home or in practice."

Of course, wrestling has been a part of his personal and family culture since a very young age, but that does not exactly mean that it is his favorite sport.

"I've been wrestling since the 1st grade, and it wasn't until I got into high school that I started going to wrestling camps in the off-season to help me improve," he explained. "I love wrestling, but my favorite sport is baseball."

Then again, the Godinhos are there in support of Shawn at nearly every Rocket baseball game in the spring.

In addition, Shawn played defense and carried the rock during football season to fill out a complete three-sport athlete resume.

Shawn has his eye of the future as well and baseball could play a part in his post high school plans.

Before baseball season, Shawn Godinho has two more wrestling meets to think about and one can only imagine that his entire family will be thinking about them too.