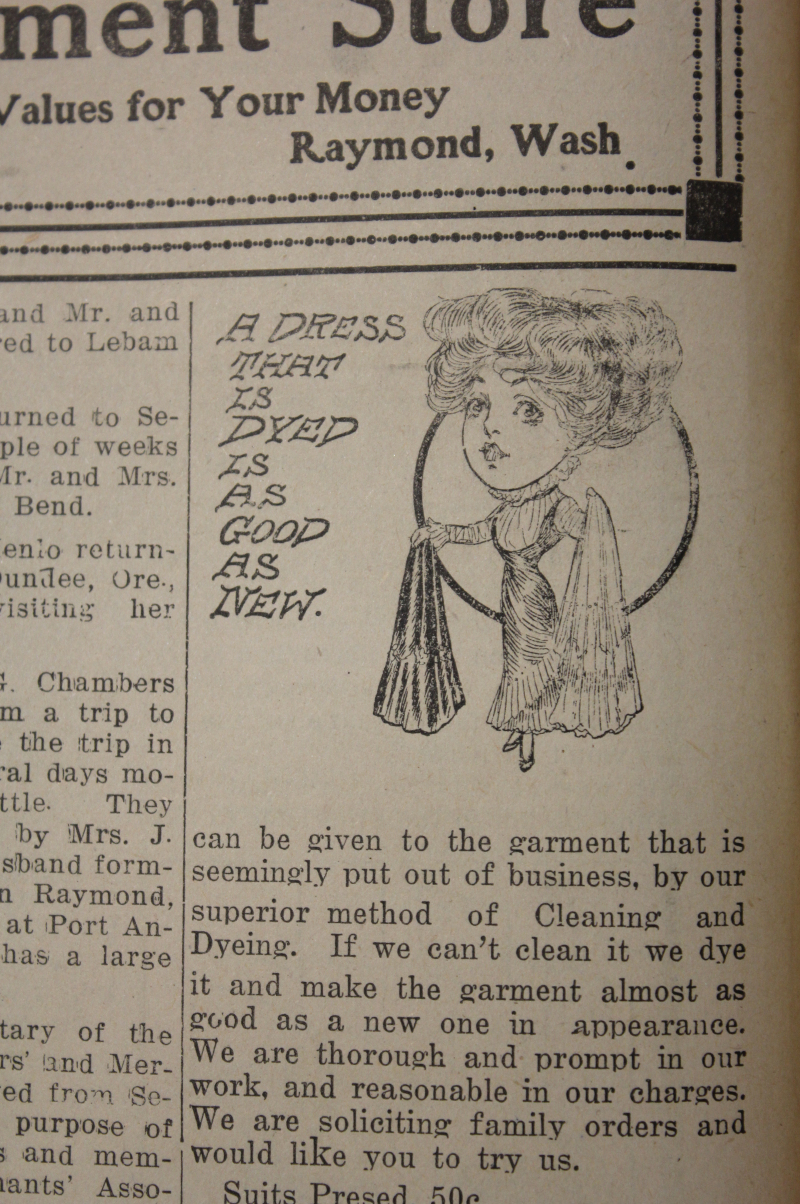 From the Raymond Herald, August 13, 1915 Raymond Steam Laundry and City Dye Works Says... "A dress that is dyed is as good as new"

Glance at the Past articles are original reprints of the original publication.

Serious fire in Riverview.
A fire which came near proving very disastrous for the Riverview hospital, and which resulted in the burning of two dwelling houses in Riverview, occurred yesterday afternoon at about four o clock. The fire started in the home of Frank Sabalon, catching about the flue just as Mrs. Sabalon was beginning to get supper. Before the department could get water the building was enveloped in flames, which spread to the adjoining house, which was but a few feet away, and which was owned by Edward Blaskavich. This was a large two story building, and the sparks lighting on the Riverview hospital, which was about 150 feet away, started fire in the roof two or three times. The patients on the second floor of the hospital who were unable to help themselves, were carried down to the first floor in readiness to be removed from the building should the fire get beyond control. For a time some of the patients were greatly excited and kept the nurses busy quieting them. Drs. Mathieu and Maclennan were present and supervised the moving of the patients, and kept things as orderly as was possible under the circumstances.

About 7:15 in the evening the fire broke out again in what was left of the Sabalon building, and an alarm was turned in. Shortly after midnight another alarm was turned in, the Blaskavich house again having started to burn, and the department was called out for the third time for the same fire.

Raymond Schools to open Tuesday.
Raymond schools will open their doors to students Tuesday, August 31, with buses running on regular schedules, lunches being served and a full day of classes in prospect. The junior and senior high schools will start the day's activities with a student assembly. Associated Student Body President Fred Mouncer will introduce new teachers and new students, after which classes will get underway.

South Bend Police car badly burned in Tuesday fire.
South Bend firemen were called out Tuesday shortly before 1pm when Police Chief Eugene Barnum's police car caught fire in front of his residence.
Barnum had dampened down the blaze pretty well with a garden hose by the time the firemen arrived.

The fire started on the right side of the automobile in the seat upholstery. Damage was extensive before Barnum discovered it.

Since both men are democrats and no republicans file the September 18 primary will decide the election on November 6.

Williamson, 59, was voted mayor of Aberdeen in 1987 after serving as a city councilman for four years.

Read more from:
WHH - Glance at the Past
Tags:
None
Share: