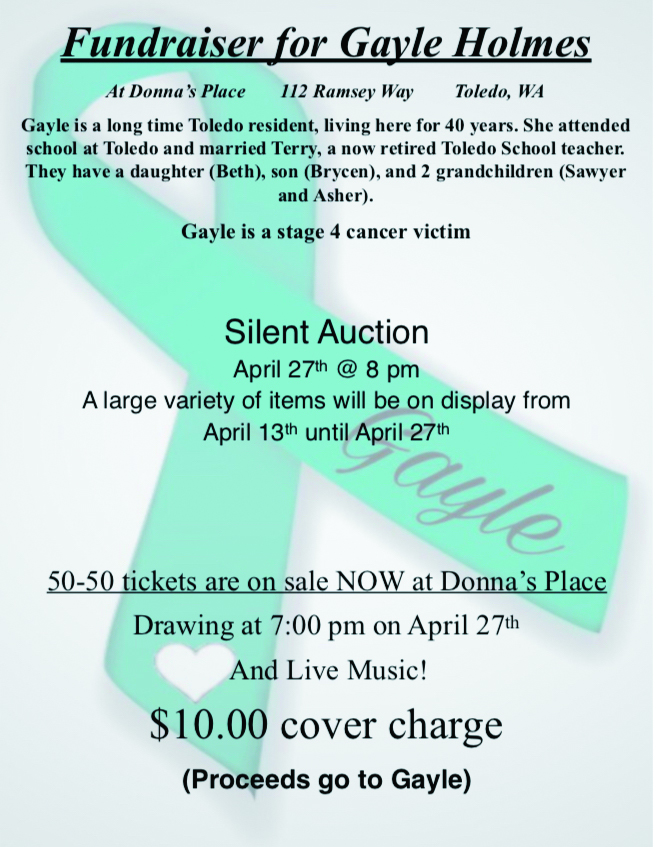 On Saturday, April 27, there will be a fundraiser at Donna's Place for Gayle Holmes. Gayle, a long time resident of Toledo, has been diagnosed with stage 4 Ovarian cancer. There will be a silent auction, 50/50 raffle and live music by Darken Side, Gayle and Terry's son.

Gayle works at the dentist office in Winlock, and was diagnosed in January of 2019. She has continued to work during this time which is never easy to do. Gayle is married to Terry Holmes, who retired this past year from teaching. The Holmes family has been active in the community for many years and all who know them love them for their dedication.

Donna Wallace, owner of Donna's Place stated, "This is a fundraiser that is near and dear to everyone who knows the Holmes family. The community has the opportunity to give back to the Holmes family after years of dedication to the kids in the community."

Terry and Gayle have two children, Beth and Brycen and two grandchildren, Sawyer and Asher.

The Prime Rib Dinner will start at 4:30 p.m. and a limited menu will be served as well. Live music will begin at 8:00 p.m. Cover is $10 with the proceeds going to the Holmes family. Terry lost his insurance when he retired from Toledo High School and his new insurance has not kicked in yet. Any assistance for the family is greatly appreciated. All proceeds will go to help pay for past and present medical bills.

Gayle and Terry have been a constant in Toledo now for many years. Winlock and Toledo have always had a friendly rivalry, but this is the opportunity for all communities to show your support for someone who gives their time to Winlock and Toledo. Hope to see everyone there!