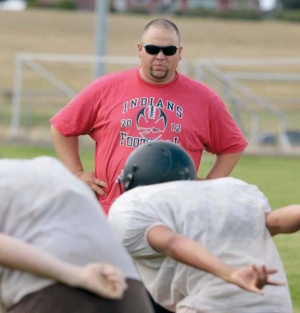 Toledo Head Coach Jeremy Thibault (background) watched his offensive linemen during drills on Thursday afternoon. Area schools are busy preparing for the start of football season, which kicks off this week.

With the beginning of school also comes the local high school football season. All three area teams will begin their 2013 campaigns this week.

Toledo will be the only team on the road as they begin in Stevenson. Head Coach Jeremy Thibault says that he has a small senior class, but has a good number of athletes available.

"We are trying to find places for young kids to play," said the head coach. "They are hard workers and eager to learn."

Thibault is blessed with five assistant coaches and a couple of returning stud athletes in Gage McDill and Creed Askin. The coach has also been impressed with Mason Gaul and Taylor Hicks as they prepare to fill the running back position for the Indians.

"They are strong and dedicated kids," complimented the coach.

Toledo will have to have a road warrior mentality this year with just three home games on the schedule. Two of them come on back-to-back Fridays in late October.

In Winlock, football has been displaced by some facility improvements. Until this week, the home field for the Cardinals has been closed due to the installation of an irrigation system. In addition, fans can expect a new scoreboard all thanks to a series of grants. The Cardinals in the meantime have been practicing on the baseball field.

As usual, there is also a lot of excitement for football in Castle Rock after the Rockets returned to the district playoffs in 20012. The Rockets will begin their season with a home game against Seton Catholic on Friday night.