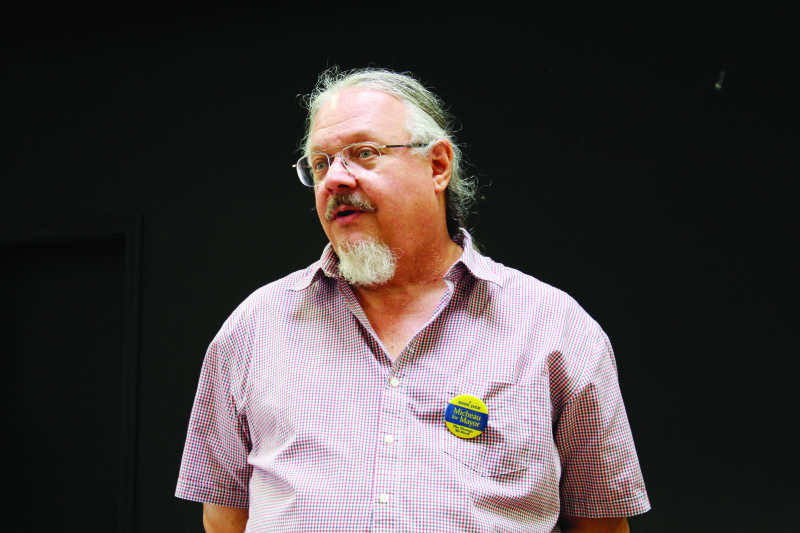 "Homelessness...So far I think the situation has been handled poorly on the city's end." - Micheau

Editors Note:
With the length of the forum that we are highlighting in this issue we will be brining you a two-part article on the Forum at Furford. Here is Part one.

During an evening gathering of around 30 political savvy Harborites of Aberdeen and other communities, Aberdeen Mayoral candidates Jack Micheau and Erik Larson, fresh off the Grays Harbor primary, answered questions from the public at the Furford Gathering Center.

With the general election edging closer and with enough unclaimed votes to make the race very close, Micheau and Larson agreed to participate in an open public forum without forewarning of topics or questions.

Larson came out of the August Primary with 54.87% of the 2,517 votes cast in the election. Micheau garnered 24.35%, enough to outpace Mayor Bill Simpson running for re-election. Now out of the primary there are 523 Simpson votes that they will look to get the better part of.

It is never easy to get a single word answer from anyone running for public office, the pair were asked to give one word that best described them. For Larson it was "Optimistic" And for Micheau it was "Thinker".

Both lifelong residents of the Aberdeen Community, in opening statements Larson shared that he had always had an interest in whom his public leaders were and what they were doing. Looking for the best fit for his contributions he saw the position of Mayor as a way to give back to the community.

"I saw a city who had energy and people who wanted to get things done...wanting to make changes, willing to move forward."

Micheau also shared his interest in the position after several years of service to the community and was the first to announce his candidacy.

"Aberdeen and Grays Harbor can not afford anymore passive leadership...someone has to take control or lead the charge if you will. We need to find a shared vision, a community vision and action plan."

The audience was allowed to ask any questions that they may have and the duo took turns answering them in alternating fashion. The rules of the forum were simple, ask either one of the candidates a question or pose the question for both to respond, follow ups were allowed and be respectful.

The first audience question dealt with Communication with the Port of Grays Harbor.

Question - How do you view the cities administration in regard to contact and interaction with the Port of Grays Harbor?

Micheau - "The very first thing that I did which prompted the announcement of my candidacy was to go down and meet with the entire port management staff, they told me something really interesting - no Aberdeen candidate have ever done that before."

Micheau continued to explain that he learned more about the car business that is run down there and touched on the subject of oil. Micheau also praised the Port for keeping the community in jobs for the past 10 years.

Larson - Spoke about the current contracts that the Port was going after, that he also had visited with the Port management staff, and found that they were possibly not going after some business based on the lack of city support.

"I wondered if they had not gone after other contracts because they did not have a city who was going to work with them. It seemed that they had found ways to go around city hall. And that is not the relationship that I want at all."

Q - What help do you think the city of Aberdeen can give to the Grays Harbor Historical Seaport?

Larson - "I think they have a great board, have a great direction, good vision and master plan that is functional...there greatest need is capitol."

Larson stated that he believed that the city could assist them in several ways like helping with providing resources to assist with permitting and resources for funding of on-going projects. And working with other outside communities.

Micheau - "I was on the Seaport Board for a couple of years during their darkest hours...We hired Les Bolton and he managed us through those times by working with other ports to cover expenses...the biggest thing that we can do as a city is to facilitate developing that home port, it is the ideal location now."

Micheau continued to say that part of the issues with the port facility is the current structure of how the Seaport is set up and that possibly that could be changed to better position the port. Micheau also spoke about further developing specific areas of the port lands to possibly introduce other industry like a bottling facility.

Both candidates see the need to get additional funding for the port facility and see that it would better assist the future development of the current Historical Seaport. They both also spoke on the excess of industrial water supply that should be utilized for new industry. Larson mentioned the coordinated effort of going after grants and that the city would be better served with a new position in the city to oversee all departments when going after grants.

Micheau agreed with Larson about the excessive amount of industrial water available - but cautioned that the city should not sell all their water rights with the current situations that the state is in as "we may need that water in a few years".

Micheau - "The thing that I learned visiting the port is that there is an immediate need and plan to use the area for more cars. With the unique design of the pontoon facility it will have to be rebuilt and re-permitted for most any new business - for Pasha they are just looking to park more cars...Homelessness...So far I think the situation has been handled poorly on the cities end."

Micheau continued to speak on the homeless situation stating that with the state law that allows a church to house homeless individuals for up to 90 days, that the time has almost expired and no one is stepping up to the plate. He further expanded on the possibility that the recent closing of the Thunderbird Hotel might be a solution for homeless families if several steps happened in order.

Larson - "I talked to the port about the pontoon project property and it is their belief that the state will be coming in with a much higher assessment value then it would be affordable for the port to purchase."

Larson took a different approach to the homeless situation noting that there are programs for families and housing but that the homeless focus should be on those that are recovering from addiction and a possible specific "community" could be created. Larson sited recent situations in Olympia that created a homeless community and it now, several years later, is generating revenue.

We will have the conclusion of the Forum at Furford next week.