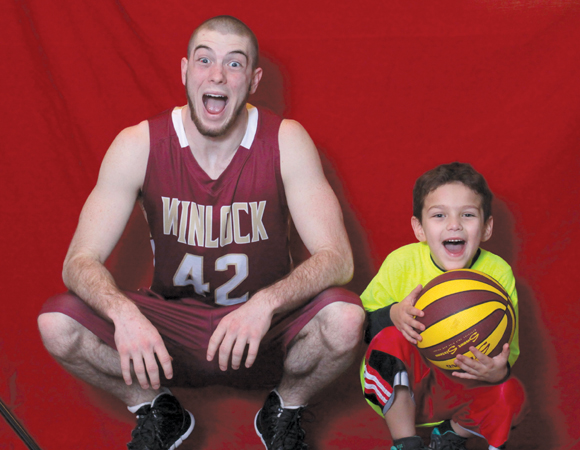 The Winlock boys basketball team may have not had a very successful season, but one thing is for sure: any team that wants to challenge them in a hunting contest better do their scouting first.

The senior-laden team includes Deven Miller, Skylar Tremayne and Chance Fisher. Add Junior Shad Coleman and you have an all-star group of outdoorsmen.

It has been Fisher that has stepped forward to become one of the most vocal leaders on this year's team and he can be observed battling with the Central League's other bigs for rebounds. He is tenacious!

During several games this year, Fisher recorded rebound totals in the teens, including two games with 15 rebounds. Against North Beach in the District IV tournament last season, he captured 17.

“Basketball has been a great experience and I have a lot of great memories from it.” said Fisher, who has been playing since third or fourth grade.

Fisher has made a name for himself in each sport he has played. During football, Fisher often broke big runs as a running back.  Early during basketball season, Chronicle sports reporter Brandon Hanson Tweeted from a Winlock contest: “Now that I see Chance Fisher on the basketball court, I am not sure how anyone ever tackled him on the football field.”

“I really under-stressed how much Coach Voie helped me and believed in me,” said Fisher. “He is really a great guy and an inspiration.”

Fisher also mentioned Stu Hodnot as one of his mentors. Hodnot, once a fine high-jumper at Oregon State, will be coaching Fisher for a hopeful return to the WIAA Track and Field meet in this spring.

Anyone that has ever been to a Winlock basketball game could not ignore the support he receives from his parents Leo and Laurel Fisher. "Rebound the ball!" has echoed off of the walls of area gymnasiums from Winlock all the way to Spokane.

He was a huge part of last year's Cinderella team that went all the way to the final eight in the WIAA State tournament.

Upon completion of his final year at Winlock High School, Fisher is headed to Lower Columbia College where he will begin a program that will eventually lead him to become a firefighter/paramedic.

Seeing Fisher work with young children at Winlock's Little Dribblers Basketball Camp these last few weekends, onlookers couldn't help but notice how popular he was with the up and coming youngsters. His gregarious personality is contagious as Fisher posed for pictures with young kids long after most of his teammates left the building.

Even the most stoic of children would strike an entertaining pose to match that of Fisher.

To see him play high school basketball at Winlock, they had better get to the WHS gym this Friday or Saturday.

Winlock's Chance Fisher goes in for a shot against Tenino earlier this season.