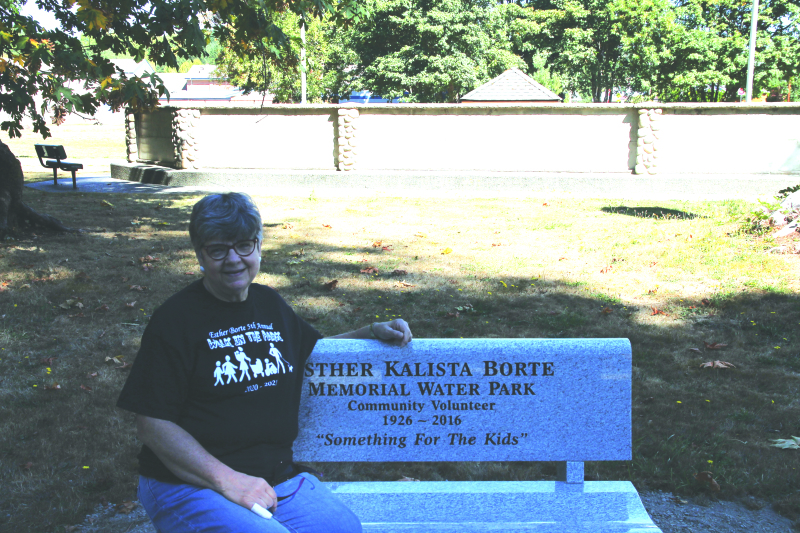 In Toledo Kemp Olson Park there is now a memorial to one of the greatest volunteers in Toledo's history. Esther Kalista Borte memorial is now at the park; it's a beautiful bench made out of granite. It has inscribed on it, Esther Kalista Borte, Memorial Water Park, Community Volunteer, 1926-2016, Something for the kids."

Christine Borte Mershon sat down with us to talk about her mom. If you know the Kalista or Borte families, you know they have a heart as big as one could possibly be. It's the love for the community that kept Esther in the volunteer world for so long.

Christine talks about her mom wanting to have a water splash park, she stated, "Mom got the idea of a water/splash park. Mom was intrigued and thought it could be developed here. They are expensive. She got the idea in the last year of collecting coins to help pay for the park. She put out jars and gave them to everyone she could." Christine talked about rolling all the coins with members of her family. She was laughing as she mentioned rolling pennies, nickels, dimes and quarters."

"After mom died, we decided to carry out her wish for the waterpark," Christine continued. "When people asked about donations, we set up the Esther Borte Memorial Waterpark fund. The waterpark came to be by volunteers and donations. The rock is in the center, it has a hole from the blasting where the sprinkler is."

They wanted a permanent memorial for Esther, Christine continued, "We wanted a permanent memorial for Mom. The family, John, Mary, Christine and niece Beth got together and this is what they came up with. The bench is made of granite, easier to clean in case of graffiti." When you see the bench in person, it is the most beautiful bench in the park.

Christine talks about a few things her mother was involved in, "Mom did just about anything you can think, she was a Cub Scout leader, 4H leader, taught sewing to a lot of girls. She then got involved in the late 70s with the Band Boosters. She also got involved in the Toledo Senior Center, where she worked as a volunteer. She got involved in quilting classes offered by Centralia College. Mom also got involved in the senior center breakfast, when at the time they were just serving pancakes. She expanded the menu by including eggs, ham, sausage and biscuits and gravy. Then she finally recruited her family for the breakfast event."

Christine drove down from Seattle once a month to help with the breakfast. Christine loved Toledo as much as her mom; she is now a permanent resident of Toledo.

"Mom was a park board member, she was trying to come up with ideas for park improvements. So she created the event, 'Walk in the Park.' Mom said they could get T-shirts, where people would pay to walk with members of the community. The amount now assists with paying for the improvements. She was involved in the RV stations and bathrooms. She was also involved in the Toledo Historical Community. To this day, there is a quilt hanging in city hall. Mom's idea was to bring people together while raising money for a good cause."

A good cause it has turned out to be. The annual Esther Borte Walk in the Park will be held September 25. The tradition has continued since 2016, a T-Shirt and a walk in the park with community members is still going strong today. Esther made the first quilt for the Walk in the Park, now her daughter Mary Blair makes the quilt every year, same pattern, just different colors.

Christine's final statement about her mom is, "Mom truly cared about the community. Her roots are here and her family are very deep rooted in the community."

When Christine talks about her mom, you can tell how much she loved her and wanted to carry on with her wishes. They say a mother's love is irreplaceable, but a daughter's love is just as strong. Esther was a volunteer for years; she is still missed today. To this day, Esther's remaining family members are involved in the community, it's a love their mother had and it is also a love for their mother. What an honor for the community of Toledo to have such a wonderful family still helping to this day.

The Esther Borte Walk in the Park will be held at Kemp Olson Park on September 25, 2021. Last year they were unable to have the walk, it was all online. This year, it is the hope that people will come out for the walk and support their beautiful park.