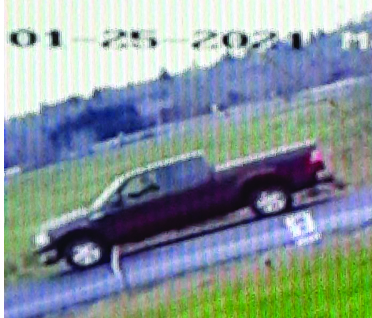 Growing up in South Lewis County, I always knew it was the area where people just want to be left alone. We don't care what anyone does as long as it does not affect us, or so I thought. I was on Facebook on Thursday, where I saw a racial slur written on a cup against someone I personally know. It was the first time since I have been back in this area that I have actually seen something racial and it made my blood boil!

First, as with the racial issues that are going on, we don't always know how to react when we see something but seeing that, I knew I had to look into it. I called Lewis County Sheriff Rob Snaza who informed me that this has been ongoing. I asked Sheriff Snaza to provide any information he could to the media. As a media person, when one person in our community is hurting, we all are and this is not just hurtful, it's hateful!

This is the information I received from the Lewis County Sheriff Office - "LCSO Case number 20C1098 - ATL (Attempt to Locate) - The pictured vehicle that was involved in numerous littering harassment calls on *********** road in Toledo. The driver continually drops paper cups with racial slur written on them, along with shouting racial slurs at the resident." Lewis County News removed the road name for privacy purposes.

This is not just wrong, it goes against everything we live for here in Lewis County. First, we were not raised to see skin color, we were raised to look at the person. To find out that someone in our area is harassing someone over skin color is something we should all want to stop immediately. Someone knows the person in this picture that we have provided. Someone knows this person and his hate, it's that simple, it's hate. Hate has no place in Lewis County, none!
I have lived in many cities, I have hired many people over the years, of all nationalities and religions. I always looked at their work, not what they looked like or

what religion they practice. Now someone in our community is judging someone based on what they look like, it's harassment, bullying, and hate, everything we stand against in our small community.

I have personally been helping a friend, who, incidentally, is a two-time Superbowl Champion. He lives in another state and he is experiencing the same type of racism, yet all he has tried to do is help the city his children grow up in. He had hoped to help his small community, instead, they have stopped him because he is black, that's it. He wanted to build a sports complex, he was the first person the city refused a zoning change in the community for years, based on skin color.

As well, he wanted to build nice apartments, again he has been refused a change of use by the city and merely for his skin color, as witnesses who work for the city have testified. We have had to bring in government officials to help him because of the hate that resides on that city's council.

We, in Lewis County, do not want to become an area so bent on hate that we can not see the good that someone is doing because of skin color. It's time we all set out to find this person who is harassing them and get it to stop. No one should have to come to their home, their refuge, and deal with this nonsense!

I hope that these pictures help identify this person, we can not tolerate any hate in our communities. Stop the hate!