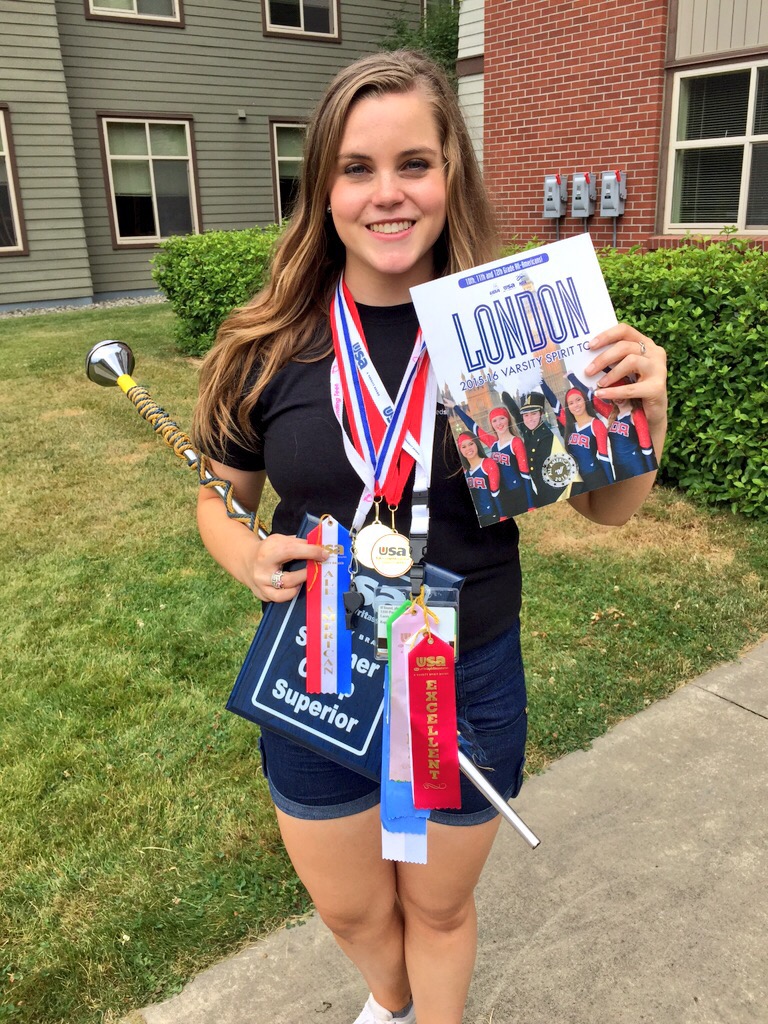 McKenzie Brooks stands with her baton and medals after receiving the news that she was selected to be the All-American Drum Major.

McKenzie Brooks of Aberdeen High School is going off to London for New Year's Day with an All-American Marching Band consisting of drum majors from all over the U.S. The band will march through London and Brooks will have the honor of representing Grays Harbor, Washington and the United States of America while she's there.

Brooks told of the journey she has had in band and said that she has been aiming to be the All-American since she was a Sophomore, "my Freshmen year in the marching band I played the saxophone, and applied for drum major then. Aberdeen hadn't had a sophomore drum major in 13 years so it was kind of a 'why not try," Brooks explained. Brooks went on to tell about the process of applying for drum major, giving examples such as essays that are required of the applicant, and even then the applicant still has hoops to jump through. "I applied and there's an application to do with an essay and then you go through an interviewing process with the old drum major and band director," said Brooks. Brooks was one of fourteen applicants, and was the first Sophomore drum major that Aberdeen High School had in thirteen years. The band goes to a camp in Canada in the summer where the band selects the next drum major.

Brooks explained that in the summer of each year the drum majors go to a drum major-specific camp at St. Martins University in Lacey. "During your time there you learn how to be a drum major, how to spin your baton, how to properly conduct, how to convey consonants, how to lead your peers and things of that sort," said Brooks, she went on to explain that they undergo evaluations and also practice certain parade routines. It is this camp where they select a drum major to be the "All-American" drum major, the one to march on New Year's Day in London. The camp evaluates the drum majors throughout the whole camp, Brooks gave her account of the first year at the camp: "I didn't get All-American Drum Major until I was a Senior. My first year was me getting used to the idea of leading all these people and so my Junior year I went in knowing that I already had all the skills, I was pretty confident in leading people," said Brooks. Brooks explained that in her first year she was maybe too focused, practicing routines when everyone else would be hanging out, and to her surprise did not get the status of All-American Drum Major. "I really thought that I had done enough to be All-American and so it was sort of a wake up call."

Brooks ensured that the next year was much different, "last year I decided I would just go and have fun and get to know people. I already knew everything that was going to happen so I went ahead and had fun, and I was selected," said Brooks. Brooks will be leaving for London on December 26.