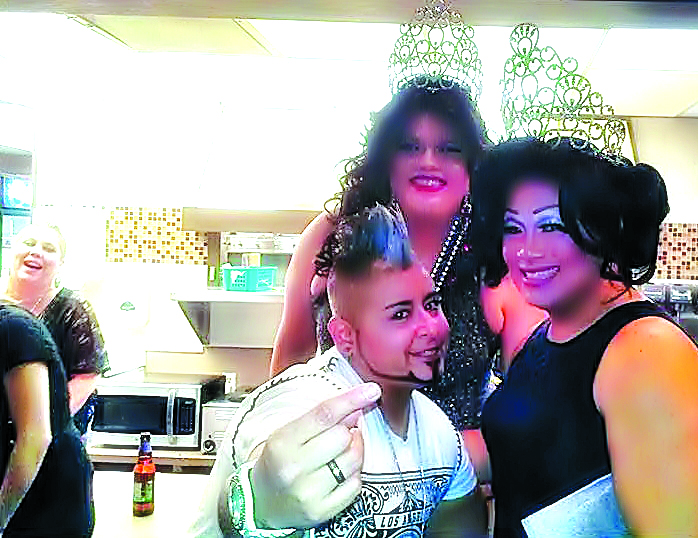 Female-to-male impersonator Ceasar Hart declined to give his real name when he spoke with the Herald last week, saying he likes to keep a distinction between his private life and his stage persona.

Still, he admitted there's naturally some unavoidable overlap between the two.

"A lot of people, even if I were to tell them my real name, would be like, I can't call you anything else but Ceasar," he said.

Something of a minority within a minority, Ceasar recognized that the notion of a drag queen is much more familiar in the public mind. He guessed the ratio between drag queens and kings to be something like 10 to 1.

"Everybody knows drag queens, but not a lot of people know what a drag king is. It really isn't that difficult because it's just the opposite of what the queens are, which is a born male impersonating a female, and I'm the exact opposite," Ceasar said, sporting a well-trimmed beard, which he later revealed to be just makeup.

Originally from Austin, Texas, Caesar moved to Washington about 15 years ago, and is something of a drag scene veteran, having been involved with shows all over the Pacific Northwest for the past 10 years.

Ceasar has only been in the Grays Harbor area for the past several years, however, and first began organizing regular local drag shows at the Simpson Avenue Grill just a year ago, though before that he'd also helped put on shows with Grays Harbor College and the Grays Harbor Pride Festival.

"Performance wise, there's usually at least 8 to 14 people. I try to keep it low, but there's a lot of people who want to do it. I hate saying no," said Ceasar of the performers who come from throughout the Pacific Northwest to participate in the local shows he organizes.

Funds are typically raised at the shows for area causes through the sale of raffle tickets, and Ceasar and his partner, Briana Sansaver, noted such local non-profit groups as PAWS and Beyond Survival have been among the beneficiaries.

"We just try to reach out to the community to see where there's a need and where we can help ... whether it's animals or the homeless," said Sansaver.
Probably their most successful benefit to date, Ceasar said, was an effort to raise money to help cover the medical bills of fellow drag performer Parker Perry Z, who was injured in an assault outside an LGBT-related event in Olympia last fall. The benefit raised $2,600, Ceasar said.

"The community wants to help. There was a lot of support from the community that we were surprised about," said Sansaver.

Ceasar said that the idea that he could use drag performances to benefit others came as an epiphany.

"When I first started doing drag it was just for fun. After I started doing it and getting more involved and realizing and seeing what I could actually do with this, and how I could actually help other people in my community that I know need help, and I couldn't do it any other way, that was it for me," he said.
Ceasar is typically involved with putting on about four or five different shows throughout the Pacific Northwest during any given month, and endeavors to put on the Simpson Avenue Grill shows, called Small Town, Big HARTS Drag Revue, every other month. He said he likes to have a few months in advance to prepare for each show in order to organize the music and performers and prepare his own performance as well.

While he said he realizes not everyone is keen on the shows, the local community has been mostly supportive, according to Ceasar.

"We've never really had too much resistance, but there are some people in the community who are not happy about it -- especially the all-ages shows -- who feel we really shouldn't be having an all-ages show and having the kids involved. I get it, but if you haven't been to one and seen that it's totally just kids having fun; I've had parents email me after these shows, and they say I have not seen my kids smile like that in years."

"I've only really ever felt nothing but love from this community," said Sansaver, further noting that those who participate in drag shows are not necessarily members of the LGBT community.

"We have plenty of people from the straight community who come to our shows. They love it," Ceasar further stated.

Ceasar is organizing an all-ages show at the Simpson Avenue Grill to be held on Jan. 15, starting at 3 p.m. It's the first all-ages show he's hosted at the venue and this time around he's not raising money for anything in particular.

"It's kind of like a brunch thing. It's early enough to where kids can do it, and it's not a big deal," he stated.

There will be a $5 cover charge and VIP tables can be reserved for $30.

A regular show for those 21 and over to raise funds to benefit the area's homeless will follow on Feb. 4, beginning at 9 p.m. The cover charge is $7 and VIP tables can be reserved for $40.

"It is definitely to give the local community a place to come together, to feel safe, and to feel like it's ok whoever you are," Ceasar concluded of the intent behind the shows.

"We have a lot of fun putting on shows for the community and helping out any way we can," said Sansaver.

The pair said they would love to see more vendors participate in local Pride events and encouraged interested parties to get in touch with the Hoquiam-based Out & Proud Grays Harbor Coalition, which they described as the area's main LGBT resource center.