Winlock woman injured in Napavine collision
Only one person was injured when a car-full of people survived a violent collision in Napavine Sunday, according to the Lewis County Sheriff’s Office.

The driver was cited for driving too fast for conditions.

Vader man charged for stolen handgun
A Vader man has been charged with possession of a stolen firearm after deputies responded to a fight in Vader Jan. 22, according to the Lewis County Sheriff’s Office.

Anthony L. Davis, 43, of Vader, had been in a dispute with the residents at a house on the 700 block of C St. and was refusing to leave. When deputies arrived, witnesses stated Davis, a convicted felon, had been in possession of a firearm and had attempted to hide it outside. Deputies located a .45 Springfield 1911 and an investigation revealed it had been stolen several years ago from Lincoln County, Mo.

It was also learned Winlock resident Kyle E. Rogers, 31, had attacked Davis during the dispute but had left prior to the arrival of law enforcement. Rogers was referred to the Lewis County Prosecutor’s Office for assault, fourth degree.

Party-goers busted after collision near Toeldo
Charges of minor in possession of alcohol and obstructing a public servant stemmed from a vehicle collision near Toledo Saturday, according to the Lewis County Sheriff’s Office.

Jake R. Swofford, 20 of Mossyrock, and Caleb A. Defrates, 21, of Castle Rock, were seen walking on the road near an abandoned car in the ditch at the intersection of Hwy. 12 and E. Avery Rd., north of Toledo.

The two initially walked toward a responding deputy but, once they realized he was law enforcement, they fled eastbound. They continued as deputies commanded them to stop but were eventually apprehended.

Both appeared to be “very intoxicated” and stated they had just come from a party, but denied driving the car, stating they had been passengers but neither was aware of the identity of the driver.

Ongoing Investigations
Those with information about ongoing investigations are encouraged to call the Sheriff’s Office at (360) 740-1266 or Crime Stoppers at 1-800-748-6422.

The 24-year-old female victim, of Winlock, said she had set her wedding ring on the microwave Jan. 18 prior to her son’s birthday party on the 500 block of N. Military Rd., east of Winlock. During the party, several guests were at the house and, when the victim went to retrieve her ring Jan. 21, she discovered it was missing.

The estimated loss is $1,667 and deputies are seeking an arrest for theft, second degree.

Thief steals game from Xbox 360
A single Xbox 360 game was the target of a burglary near Vader Jan. 22, according to the Lewis County Sheriff’s Office.

The suspect is believed to have entered an unlocked door at a residence on the 100 block of Barnes Dr., east of Vader, and gone upstairs and stolen an Xbox 360 game out the console. The estimated loss is $60.

Toledo thief leaves boot print at crime scene
Investigators are seeking a large-footed thief who burgled a shop in the Toledo area Thursday morning, according to the Lewis County Sheriff’s Office.

The 66-year-old male victim, of Toutle, said he hear the alarm in his shop go off at 8:55 p.m. on the 200 block of SR 506, west of Toledo. He went outside and saw lights on in the shop and contacted law enforcement.

Deputies found no suspect but a size 12 shoeprint on the door. Stolen were a table-chop saw, an air wrench and an extension cord. 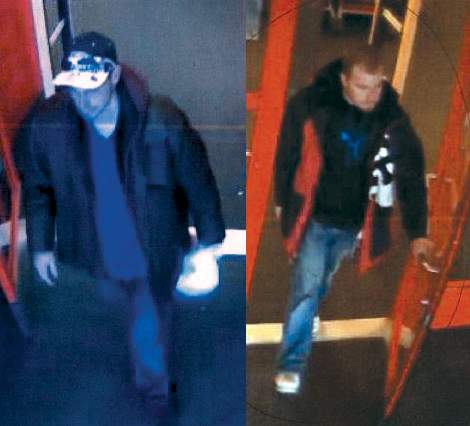 Investigators are seeking help identifying a pair of suspects connected with a burglary and ID theft near Onalaska Jan. 17.

At the residence on the 1300 block of Middle Fork Rd., north of Onalaska, suspects stole personal documents and credit cards, in addition to several firearms and a gray 1989 Ford F250. The individuals above were observed entering a Target store in Longview last week attempting to use the 55-year-old victim’s personal information.