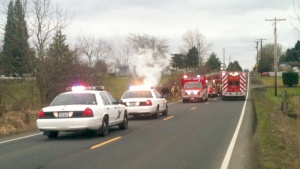 Emergency responders arriving shortly after a Centralia man veered into an electric fence on SR 505 near Winlock Sunday.

A 1999 Dodge Ram driven by a 23-year-old Winlock woman failed to slow down behind a 70-year-old Winlock man who had stopped his 2000 Ford Ranger to turn left into his driveway on the 2000 block of SR 603, north of Winlock.

While the Ram suffered minor damage and the driver was uninjured, the Ranger was totaled and it’s driver sent to Providence Centralia Hospital with lacerations to his head and elevated blood pressure. The woman was cited for tailgating.

Centralia man survives Winlock car fire
A Centralia man is still alive after surviving a car fire near Winlock Sunday, according to the Washington State Patrol.

The 66-year-old had been driving a 2005 Hyundai Accent eastbound on SR 505, east of Winlock, when he veered off the road and struck an electric fence, causing his car to ignite. After responders arrived to extinguish the flames, the driver was airlifted to Southwest Washington Medical Center, in Vancouver, with unspecified injuries.

The Accent was totaled and the cause of the wreck is still under investigation.

Mother openly admits to giving minors booze
A Chehalis woman has been arrested after furnishing alcohol to local minors at a party near Adna Saturday, according to the Lewis County Sheriff’s Office.

Connie M. Robinson, 52, admitted she had given a houseful of minors alcohol after deputies responded to reports of a loud party taking place in the 100 block of Jerica Ln. around 11:30 p.m. Robinson said the party was for her son and justified the drinking by stating none of the guests were being
allowed to leave the house.

She refused to allow deputies inside to inspect the partygoers, but they obtained a search warrant and made contact with 18 minors in possession of alcohol, which reports stated were males and females from various cities throughout the area.

All 18 were arrested as well as Robinson, who was booked into the Lewis County Jail for providing
alcohol to minors.

This party took place less than a mile up the road from where 16-year-old
Tyler S. Gonzalez was struck and killed by a vehicle May 12, 2012, after becoming intoxicated and laying in the street. Talia R. Date and Megan M. Day, both 22, of Chehalis, have been charged with providing alcohol at the party were Gonzalez was killed. Date pleaded guilty Jan. 29 and is expected to be sentenced Feb. 26.

Ongoing Investigations
Those with information about ongoing investigations are encouraged to call the Sheriff’s Office at (360) 740-1266 or Crime Stoppers at 1-800-748-6422.

The 33-year-old male victim, of Vader, said his Ford truck had been broken into sometime between Feb. 4 and 7 on the 100 block of Olequa Dr. Reported stolen were a tool tray with Husky sockets, a spotlight, a USB phone charger and 70 CDs. The estimated loss is $415.