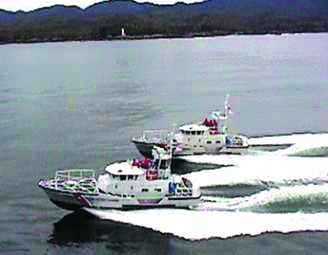 The 29-year-old male surfer was recovered by a Coast Guard 47-foot Motor Life Boat crew from Station Grays Harbor in Westport, and was transported to the Coast Guard station where he declined further care.

Coast Guard Sector Columbia River Command Center watchstanders, in Warrenton, Oregon, received notification from Grays Harbor 911 dispatch, at 9 a.m., of two surfers in distress on the north side of the North Jetty. Sector personnel issued an Urgent Marine Information Broadcast for possible assistance from mariners in the area.

The Grays Harbor MLB crew arrived alongside the surfer and his surfboard at 9:23 a.m. The distressed surfer was wearing a drysuit and was using his board as a flotation device.

The other surfer, a 46-year-old male, made it safely to shore prior to Coast Guard assets arriving on scene. The surfers were reportedly caught in the ebb tide.
"The Coast Guard supports safe recreational use of our beautiful coastline and encourages safe practices similar to the surfers that needed help today," said Chief Petty Officer Matthew Degerolamo, chief duty officer, at Sector Columbia River Command Center. "The surfers used the buddy system, dressed appropriately for the water temperature and used a floatation device to stay afloat."

The water temperature near Grays Harbor was 52 degrees, and the air temperature was 48 degrees. The sea state was 6-foot swells.