Coast Guard rescues four, and their dog near Willapa Bay 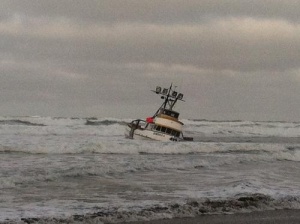 Photo by U.S. Coast Guard The 61-foot crab boat Genesis is grounded on a sandbar off Leadbetter Point at the entrance to Willapa Bay early Friday morning. The Coast Guard rescued all four crewmembers and a dog and transferred them to Coast Guard Sector Co

Coast Guard rescues four, and their dog near Willapa Bay

The Coast Guard rescued four people and their dog near Leadbetter Point at the entrance to Willapa Bay after their vessel, Genesis A, ran aground early Friday morning. Genesis A became lodged on a sandbar after the driver of the boat fell asleep, according to Petty Officer Third Class Jordan Akiyama.

Genesis A is a crab vessel out of Warrenton, Ore. The owner of the 61-foot vessel is Dennis Sturgill, Jr. Sturgill was aboard the boat at the time of the mishap. No medical attention was needed. The Coast Guard did not know the names of the other fishermen.

“They are there to remove all of the contaminants,” Akiyama told the Herald. “They removed 600 gallons of fuel. We’re trying to work overtime to remove the boat. The boat will be broken apart.”

“The driver of the boat fell asleep and it landed on top of a sandbar,” Akiyama said.

“It’s very important to be mindful when going out there and always have someone with you to keep a look out and so that you don’t fall asleep,’ Akiyma said. “Even the most experienced fishermen need to be careful.”

Akiyama said that vessels running aground happen more often than it should. “It happens more than you would think it does,” he said.

At approximately 2:39 a.m., the Coast Guard received a mayday call from Genesis A after it ran aground on a sand bar. The Coast Guard launched an MH-60 Jayhawk helicopter from Air Station Astoria, Ore., and a 47-foot motor lifeboat from Station Grays Harbor. Coast Guard responders from Station Cape Disappointment also responded to the beach area near the grounding.

At approximately 3:37 a.m., the helicopter crew hoisted the four members and their dog on board and brought them to Sector Columbia River.

The cause of the grounding is still under investigation.