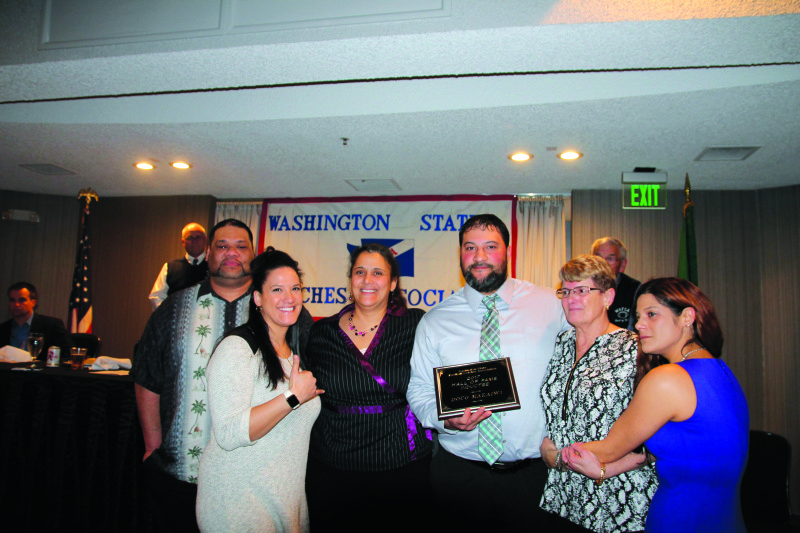 Among those in attendance for the induction ceremony were, left to right, Makaiwi's nephew Abe, his daughters Karissa and Kaelea, son Kalin, wife Marvine, and daughter Kabria.

The family and friends of former Raymond High School Football Coach Doug Makaiwi will no doubt remember the evening of Saturday, Jan. 28, for years to come, as Coach "Mak" was posthumously inducted into the Washington State Football Hall of Fame. His son, Kalin Makaiwi, accepted the award on behalf of his father and family.

Kalin spoke of the many lives Coach Mak touched.

"He was tough on the outside but known by many to be a big teddy bear," Kalin said of his late father.

Makaiwi started his football career at Farrington High School in Honolulu, where he lettered for three years. There, his team won the 5A Football State Championship in 1965, his junior year. He was selected as the All-State 5A 1st Defensive End in 1966 by the Associated Press-Star Bulletin.

His successful football career continued at Wenatchee Community College and Central Washington State College where among other honors Makaiwi was selected to the Evergreen Conference 1st Team Defensive Team, as All-District 1st Team Defensive End (2 years), and to the NAIA All-American 3rd Team.

Over 22 seasons at Raymond, Makaiwi won six Pacific League Titles and coached teams that made it to the State quarter finals or better six times. When he retired from coaching at Raymond he didn't stop being involved with football, serving as assistant coach at North Kitsap High School for 3 years where his daughter Kaelea also coaches.

"Coach Mak deserved this award," Raymond Athletic Director Mike Tully told those assembled for the induction. "He coached me, and I am still using many of those plays today. He inspired me to become part of the athletic department. This award is for all the years of coaching that Coach Mak did in Raymond, and we are proud they are recognizing him for the years of hard work."

Bob Bourgette, a friend of Coach Mak's from the early 70's and himself a 2007 Hall of Fame inductee, stated, "This award is for a coach who gave it his all. He loved the sport, and he loved his players. Doug cared for all students. He wanted kids to see their potential. I am happy to be a part of his induction into a prestigious group of coaches."

"This award is for my dad," Makaiwi's son Kalin further shared. "If you could have seen the look on his face when he got the news [of his future induction], he was grinning from ear to ear and couldn't stop."

Daughter Kaelea added, "I was with Dad when he asked Kalin to be his advocate, and he was so happy to have Kalin and him together talking about football to the crowd, one last hoorah."

Sadly, Coach Mak, who passed away from cancer in June 2016, did not make it to this day, but those who knew him agreed this is a well-deserved honor given to a great coach for his many years of dedication and success.