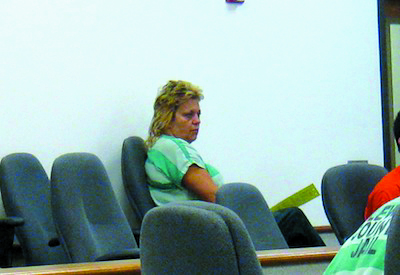 Cheryl Oleachea in the court room, charged with second-degree theft.

The clerk from Winlock's Handi store has been arrested in connection with the robbery there earlier this month.

Police arrested a 45-year-old Winlock man for the Sept. 6 incident and charged him with second-degree robbery and second-degree burglary. Tamrick A. Torres told authorities that he and the clerk, Cheryl D. Oleachea, had conspired to rob the store because she was unhappy with her wages there, according to prosecutors.

Last week, when an officer stopped Torres for speeding, he reportedly shared further details, according to court documents.

"Torres stated that his attorney would be mad at him for providing this information, but that he didn't care," prosecutors wrote.

Torres allegedly said he had the mask he used that night and also a BB gun that looked like a pistol, which the clerk had allegedly provided him, Lewis County Deputy Prosecutor Paul Masiello wrote.

When police were called to the nighttime robbery incident on Kerron Avenue, they were told by Oleachea that a person wearing a skeleton-type mask had a handgun and demanded money from the till and that she had handed it over. The clerk said the subject had reached toward his waistband where she saw what looked like the black handle of a firearm, but Torres is said to have subsequently told police he didn't use the BB gun during the robbery because he thought it was a bad idea.

Oleachea, 53, was arrested and booked into the Lewis County Jail. She was charged with second-degree theft in Lewis County Superior Court. The owner reported $1,589 in cash was missing.

Judge Nelson Hunt allowed her release on a $10,000 unsecured bond. Her arraignment is this week.