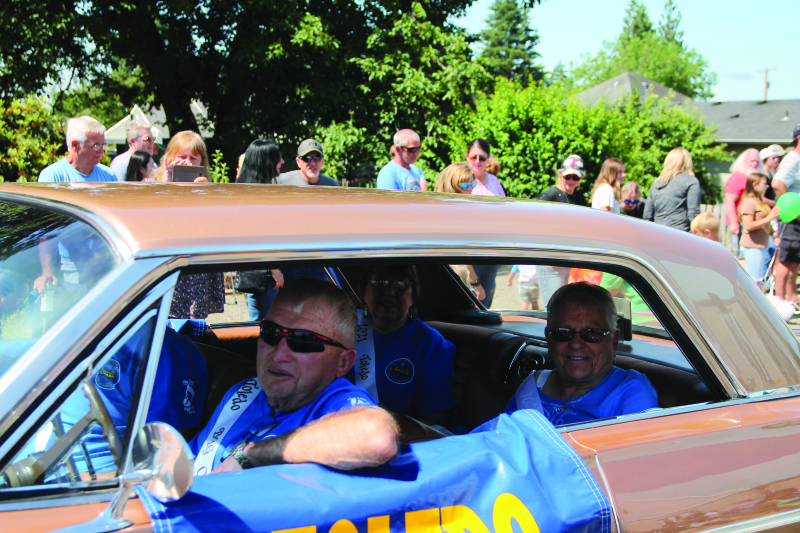 Cheese Days was a success again this year. The 100th anniversary was celebrated by all. The crowd was excited to be out and the parade route was filled with a few thousand spectators. It was a fun weekend and Saturday was no exception.

The festivities started with the Car Show at the Toledo Middle School early in the morning. The area was packed with cars and vendors. Then at 10:00 am before the parade, Winlock Dance Center performed as parents watched their dancers perform.

At 11:00 am the parade started and there were quite a few entries. Toledo Police started the parade off, with Mayor Dobosh sitting with Chief Brockmueller. Chief Mike Dorothy followed right after with the Toledo Fire Department. Toledo Big Cheeses Ron and Sue Smith and Dale and Jeanette Koth were in Ron Smith's classic car, followed by the Cheese Days float. The Toledo High School Band did an excellent job.

My favorite every year is the bigfoot captured by Jim Wallace in Northern California. Every year Jim goes to California to capture a bigfoot for all of us to see. It's a rare opportunity to capture bigfoot and bring him to the birthplace of the first founders of bigfoot. It's also my favorite partially due to Uncle Ray Wallace and others being the first to find bigfoot. Bigfoot will be returned to the wild, you can't keep an endangered species in a cage for long. The state and federal permits are only good for a few days.

After the parade, cheese sandwiches were handed out to those who wanted one.

Many then went up to the Toledo Middle School to the car show and vendors. A hometown vendor was there, Bonanza BBQ with a line moving along quickly. It's always enjoyable to get a bite of BBQ from the Bonanza Crew.

In the evening, Donna's Place hosted local country musician Chris Guenther. Chris always puts on a fabulous show and there were plenty on hand to enjoy it. Chimi's hosted the local band Sucker Punch, they were hopping as well.

The evening ended with everyone catching up with family and friends. With another Cheese Days gone, we look forward to next year.