Changes at the Church of Latter-day Saints 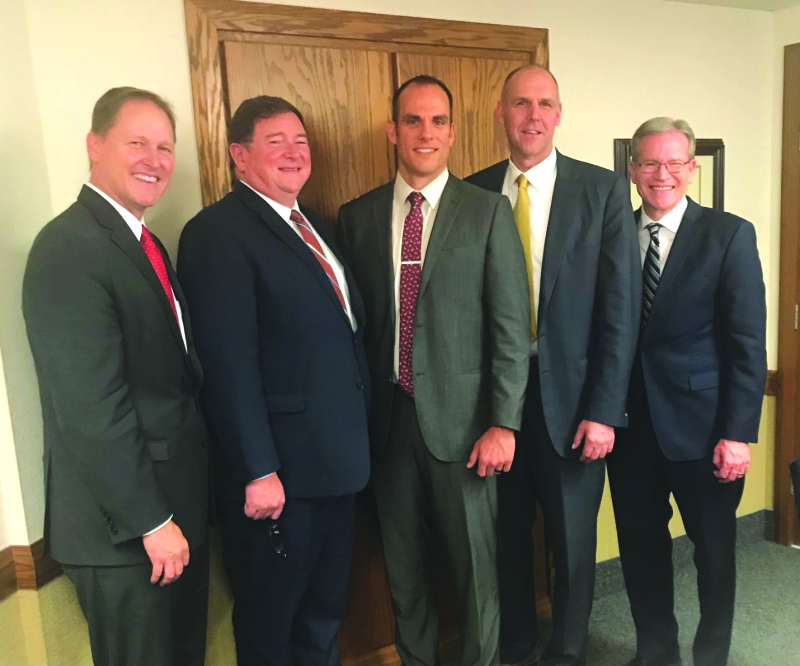 The Centralia Washington Stake of The Church of Jesus Christ of Latter-day Saints, which serves Lewis County and a portion of southern Thurston County, held a special Stake Conference on Sunday, December 12, 2021, at their Stake Center on Jackson Highway in Chehalis. Over 1,000 members were in attendance.

Together the newly called President, Casey A. Ruiz, and his Counselors will serve the spiritual and temporal needs of nearly 4,300 members, primarily residing in Lewis County. They will be guided by Church President, Russell M. Nelson, who has recently counseled church members.

Casey Ruiz and Ryan Langhaim are both local to the South County area. Casey has shown many in the area the sense of community. During one such community act, Casey and his entire family helped corral cows that belonged to a WWII veteran who lived at least a mile away. The work they did to help this gentleman was impressive to say the least.

Casey has been a part of The Church of Latter-day Saints, now he is the President. Casey stated, "I joined this church over 20 years ago knowing that this is a church of service. We believe this is the Lord's restored church and that He is at the head of it, inspiring its leaders at every level of the organization. As such, when an invitation is extended to serve in a position, we consider that a call to serve from the Lord, which we neither campaign for nor decline."

During Casey's new role, he will have administrative tasks, but he is there to serve the people. He stated, "While there will be many administrative tasks, my primary responsibility is to serve 'one by one' as the Savior did and answer His call to 'feed my sheep.' My goals include assisting members to live the gospel of Jesus Christ, strengthen family relationships, and fulfill other Christian responsibilities such as serving our neighbors and sharing the gospel with all."

Even though the Ruiz family has only been in the area for a few years, he stated, "My wonderful wife Emma and I have lived here with our children for over six years. We love being part of the Winlock community." Part of the community they truly are, Emma is on the Winlock School Board.

While many are used to seeing Casey in the south Lewis County area, his new role will have an office in the twin cities. He stated, "The stake presidency office is in our chapel in Chehalis, referred to as the Stake Center, located on Jackson Highway. Since we are responsible for several wards (congregations), we will travel around to other meeting houses as needed."

Many churches offer different programs, Casey stated the different types of services they offer. He continued, "sermons, bible studies, etc. Services at the Toledo building (on Henriot Rd.) begin at 10:00 a.m. every Sunday. It usually consists of a sacrament meeting with prayers, talks, and music all provided by members of the congregation. The second hour is a class such as gospel study. Visitors are always welcome."

Casey and his family are ones who give back to the community. What will they provide for their members in their new role? Casey stated, "Jesus taught 'where much is given, much is required.' The Lord loves effort from those who seek to follow him, not just worshiping 'with their lips.' I hope my efforts will be acceptable as I strive to lovingly help my congregants to better follow Him."

Ryan Langhaim will be serving as counselor. He stated, "As I serve as the Second Counselor to President Casey Ruiz, my main role will be to support and sustain him as he serves as the Stake President. As a Presidency, the three of us will collectively oversee the spiritual and administrative affairs of the members of The Church of Jesus Christ of Latter-day Saints in Lewis County and some outlying areas. Various aspects of our ministry include youth and children's programs, church education, special programs for women, men and couples and service opportunities."

Ryan is ready for his new role, he stated, "I have been serving in The Church of Jesus Christ of Latter-day Saints most of my entire life. I served a mission for two-years in New York City, New York. As an adult I have had many opportunities to serve in various roles. I have served in the Primary program, as a Scout leader working with the Young Men's organization, and most recently I served as the Bishop of the Mountain View Ward located in Toledo."

Ryan did not set out to be Second Counselor, he felt it was his call to service. Ryan continued, "Although I did accept this new role as the second counselor to President Ruiz, it is not a position that I lobbied for or sought. In The Church of Jesus Christ of Latter-day Saints, we believe callings are extended to us, through our leaders, as directed by God our Heavenly Father. Through the process of revelation and prayer, area church authorities extended a call to Casey Ruiz to serve as the Stake President. Upon accepting, President Ruiz then took the opportunity, along with his wife Emma Ruiz, to prayerfully ask for guidance from the Lord who should serve alongside him as his first and second counselors. Calls are then extended by the area authorities to those men, also with their wives at their sides, to serve."

Ryan is ready for his new role, he stated, "I am honored and humbled to serve as the Second Counselor in the Centralia Stake. I am personally acquainted with both President Ruiz and James Tripp and know them to be good, honorable men of high integrity."

The Church of Latter-day Saints is located between Winlock and Toledo in south Lewis County. Casey, Ryan and the members will be happy to help with any of your needs.