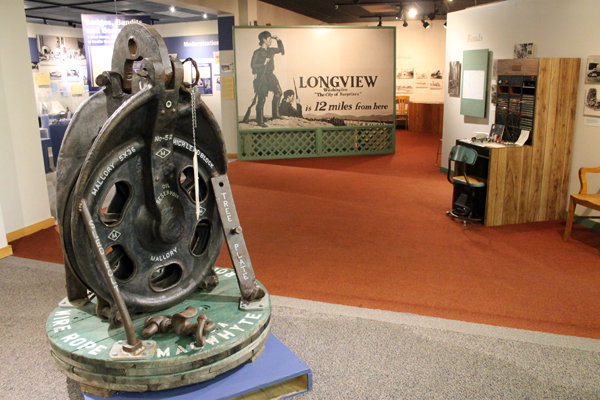 The Cowlitz County Historical Museum (lobby pictured) has received a number of artifacts from the former Castle Rock Exhibit Hall after the City Council approved donating the items during their June 8 meeting.

The Castle Rock City Council has approved the donation of relics from their former Exhibit Hall to the Cowlitz County Historical Museum, with several artifacts expected to become part of the museum's permanent displays.

Approved during the council's June 8 meeting, the donated items include multiple photographs, business documents and workman's tools representing the history of Northern Cowlitz County as far back as the early 1900s. The items had been housed in the city's Exhibit Hall until May 31, 2014, at which time the facility closed due to a lack of funding and volunteer labor supporting the program.

"So that's some public use that could potentially come out of some of that stuff," said Public Works Director Dave Vorse of the artifacts, explaining volunteers with the museum had visited the Exhibit Hall and determined which of the remaining items (those not returned to the original donors or their families) the museum would be interested in.

When interviewed Wednesday, Museum Collection Curator Bill Watson confirmed the artifacts, 17 exhibits in all, are now in the possession of the museum, with many intended to become part of new permanent displays planned for later this winter.

"We're just going to do a total revamp," he said of the current exhibits, many of which have been featured at the museum for roughly 20 years, adding the unveiling of the new display is still "six or eight months away, at least."

According to Watson, several of the artifacts donated from the Exhibit Hall, including meetings minutes from the Cowlitz Stockman's Association, old photographs and negatives from Cowlitz County Advocate, and equipment from the Sweden Mine by Spirit Lake, represent items unique to the museum's collection, sharing aspects of local history the museum had been hoping to incorporate into their displays.

Watson added such donations from local municipalities are relatively uncommon, stating the museum may receive a handful of items every year or so from local government offices.

"Occasionally we'll get small groups of items from county departments," he said of the normal flow of artifacts into the museum.

Prior to their display in the main exhibits, Watson said the artifacts from the Exhibit Hall will remain in storage, though certain photographs are expected to be scanned and added to the museum's digital archives in the next month or so. Those wishing to see the current items on display at the museum may visit their facility at 405 Allen St., in Kelso, Tuesday through Saturday from 10 a.m. to 4 p.m., and may call (360) 577-3119 for more information.

Since the closure of the Exhibit Hall, the City Council has determined, though the help of local residents and focus groups, to turn the building into a Community Events Center and, in February, directed city staff and committee members to begin seeking grant funding toward that end.