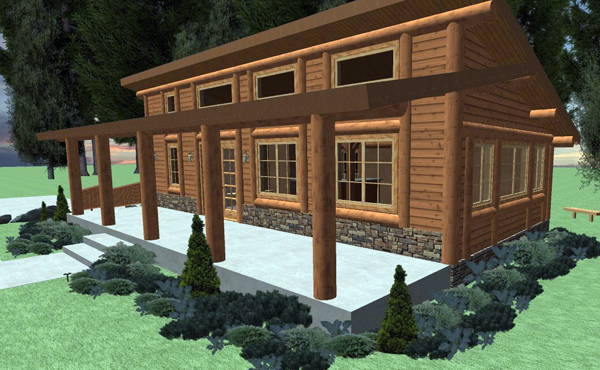 An artist's conceptual rendering of Castle Rock's new Visitor's Center, which will be located at Exit 49 and for which the City Council selected a contractor to construct during their Feb. 23 meeting.

The Castle Rock City Council has approved a contractor to begin work on their new Visitor's Center at Exit 49, with the building expected to be completed possibly by September.

Approved during the council's Feb. 23 meeting, Battle Ground-based Wolf Industries Inc. was awarded the bid for the project, which is estimated to cost around $97,000 and will bring the project to a "weathered in" state by the middle of August, after which time other contractors and volunteers will complete utilities and other finishing work.

"It's probably going to be a Labor Day-type opening," said Public Works Director Dave Vorse when presenting bids to the council, which ranged as high as $170,000 from two other contractors.

Vorse explained the low bid from Wolf Industries included reductions in the scope of work, including installation of a composite roof instead of a metal roof, elimination of two exterior windows and an entrance walkway, and changing from a solid core entrance door to a six-footFrench door.

Vorse said his department had worked with Mayor Paul Helenberg to determine these cost reductions, estimated to save around $5,500 for the project, as a way of "trying to live within the budget that we have," Vorse stated, adding the city has been looking for ways to reduce the project's expenses since their award of the rural economic development grant was $14,000 less than they had applied for.

It is also expected local residents and businesses will further reduce costs by volunteering time and effort toward completing the project, which will include sheetrock, carpentry, landscaping and utilities.

"I have some commitments from local guys for the electrical and the plumbing," said Helenberg, stating he understands the city may have a significant portion of labor donated to the project.

Once completed, the Visitor's Center will serve as a means of welcoming guests to the area and pointing them to local attractions and amenities, replacing the services once performed by the city's former Exhibit Hall, which closed last May. The council has since approved a plan to re-purpose the old Exhibit Hall building as a Community Event Center, which is expected to take shape in the coming months.