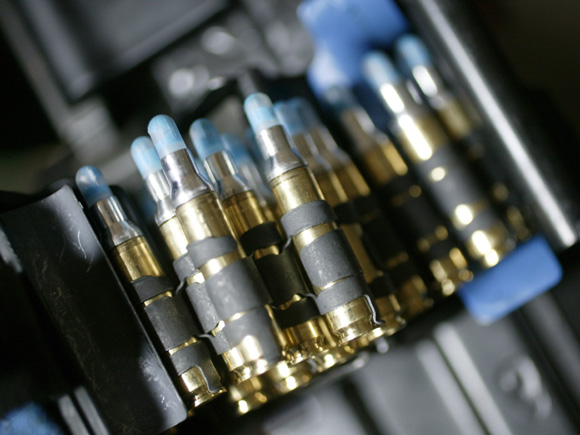 Simunition, a training tool tipped with less-lethal rounds of dye used for realistic firearm mock scenes. The Castle Rock Police Department is considering using such equipment to train its officers and intends to do so through county sales tax funding set aside for such expenses rather than use the funding for salaries and vehicles within the department.

The Castle Rock City Council has decided to use $15,000 in surplus police funding, as well as $5,000 from the general fund, to help acquire equipment for law enforcement and maintain a fifth full-time officer’s position.

It had been reported earlier in January the Police Department would likely have a significant surplus when accounts were settled for 2013, and Council Member Lee Kessler, a reserve officer and staff sergeant for Castle Rock, proposed the extra funding could be used to decrease the department’s dependence on county sales tax set aside for law enforcement.

Kessler explained the department had been using the sales tax during 2013 to supplement a full-time position, which previously had been funded by a three-year grant from the Department of Justice. Kessler said the position had been considered a new expense when the grant expired and qualified for use of the sales tax funding, but would no longer qualify at this time and would have to be funded through the department’s budget.

Once the sales tax funding has been freed up, continued Kessler, it is his proposal the department invest in Simunition, a type of non-lethal firearms training equipment. Officer Branden McNew gave a presentation to the council that night described Simunition rounds as similar to paintballs, but said they are instead fired using gunpowder and from actual handguns. McNew explained training with such realistic equipment can further decreases the city’s liability profile, adding Simunition allows for more visceral encounters between officers and simulated offenders because neither will feel very keen on being struck by the projectiles.

Kessler said, if it is the council’s interest to pursue such an end, the sales tax funding could be employed for the purchase of Simunition training equipment as it would be considered an exceptional or new expense to the department.

The council approved the budgetary amendment and will consider it again for a second reading during their March 10 meeting.

While it had originally been Kessler’s intent to seek a $10,000 transfer from the general fund, with the intent of providing $5,000 more for salaries, it was felt by the council they should not be too liberal in drawing from the fund, as Castle Rock is attempting to comply with a directive from the State Auditor’s Office to maintain a reserve equal to three months worth of regular expenses (around $300,000) to be used for the continuation of city services in the event of a disaster.