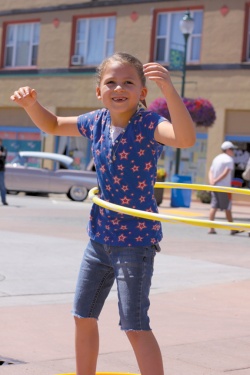 Brookylnn Rodeback, of Castle Rock, makes good use of hula hoops and music during the car show held in Downtown Castle Rock on Saturday.

Many of the events associated with Castle Rock's Mountain Mania were canceled due to ongoing construction in downtown Castle Rock, but the annual car show continued to thrive.

This year's show brought about 70 cars to the newly-reinvented CR city center. Organizer Jim Grose said the turn out, although less than last year's 90 cars, was pretty good considering car shows in Puyallup, Yakima and near-by Chehalis were all taking a bite of the available exhibitors.

"We have cars from all over the place," said Grose. "Largely, it is the same folks that come all the time."

A deejay supplied music and a pile of hula-hoops that kids used to display their rhythmic talents. Meagan Radeback watched her daughter and niece enjoying the hoops.

"They have been looking at the cars and enjoying the hula-hoops," she said on the near perfect weather Saturday.

Across the street, Rex Rogers had his barbecue outside of the "Tea Cup". He and his wife brought the business to Castle Rock from Centralia after nearly a decade of commuting to the Hub City where she had a similar business with nearly 2600 square feet of space. Inside are a number of tables and an eclectic collection of teas and other products.

Kathi Rogers is hoping to sustain the space to eventually offer lunch and "high teas" by reservation along other products and services.

On Saturday, the action was outside as Rex Rodgers sold treats to the car show crowd straight from the barbecue and ice cooler on the sidewalk.

Rodgers admitted there is still a subtle negative mindset with regard to the construction in downtown Castle Rock. He described it as a fatigue and a general desire to avoid the construction area.

On Saturday afternoon, visitors separated from their cars and took in Castle Rock by foot. In the process, the relaxed pace of yesteryear returned as the stars included classic cars and hula-hoops. 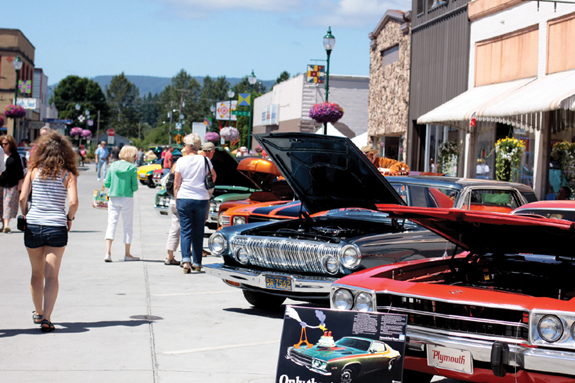 Classic cars were on display along with the modern look of Castle Rock downtown on Saturday during the annual car show.