BYU Singers to perform this Friday at Centralia College 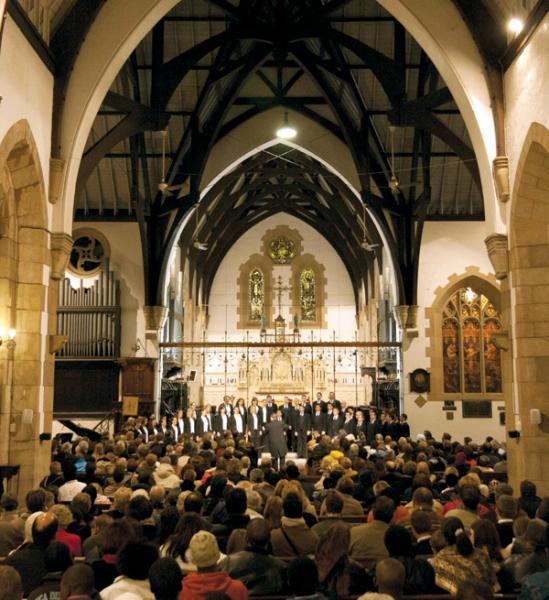 The BYU Singers perform at St. Mary's Cathedral during a tour in Port Elizabeth, South Africa. The singers will perform this Friday at Centralia College and the public is invited to attend.

The Brigham Young University Singers incorporate moving music from a broad base of choral traditions in their expansive repertoire that impresses audiences of all ages. The superb performance abilities of this 40-voice ensemble will create a must-see concert to be performed at Centralia Community College "Corbet Theatre," Friday at 7 p.m.

The BYU Singers are grounded in classic choral tradition, but extend their talents to pieces of various periods and styles. International folk songs, hymns, and moving African-American spirituals are a sampling of the genres included in the BYU Singers' repertoire. Once the concert begins, the diverse talents and professionalism of the BYU Singers is apparent.

Rather than simply combining a group of pleasant voices in song, BYU Singers unites beautiful voices with fully committed hearts and minds into a choir of one voice that reaches the mind and heart of the listener. The Singers offer a concert of musical expression that lifts and enlivens the soul - an antidote to the cynicism and sarcasm so prevalent in the world.

BYU Singers' concerts always include hymns and anthems, folk songs and spirituals. Their program incorporates glorious musical expressions of great composers, both past and present. By offering a wide variety of music and styles, BYU Singers want to tickle the fancy, pique the curiosity, stir the spirit and stimulate the mind of everyone who attends a concert performance.

Dr. Ronald J. Staheli, founding conductor of the choir, has led the group since its creation in 1984. BYU Singers have traveled to over 27 countries throughout the world, including Russia, Romania, Hungary, Austria, England, Italy, Israel, Egypt, New Zealand, and South Africa. Most recently the choir toured Wales, England, where they sang their impressive set in world-renowned locations.

The BYU Singers have performed in some of the most prestigious concert halls in the world, including Carnegie Hall in New York City, the Kennedy Center in Washington, D.C., the Sydney Opera House and Town Hall, the Kapella in St. Petersburg, the Musik Verin in Vienna, and the new Walt Disney Concert Hall in Los Angeles.

The BYU Singers have received numerous awards and honors from performing in choir festivals, exclusive conferences, and the most prestigious concert halls in the world. Of their performance in New York's Carnegie Hall, Mr. Christos Pavlides said, "I have never experienced anything like this before. It was absolutely wonderful. At times, the voices sounded like musical instruments." Benjamin Bar'am, an Israeli critic, wrote: "This choir is comprised of exemplary, well-integrated musicians with clear, beautiful voices that achieve remarkable tone color as one voice." Maurice Casey, American Choral Directors Association President, is quoted as saying, "BYU Singers is one of the country's finest choirs