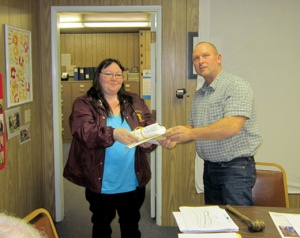 Winlock bus driver Heidi Ross-Ghazali was just driving to work the morning of Jan. 18 when she encountered two men brutally injured in an accident on Toledo-Vader Rd.

A pickup belonging to a 49-year-old Winlock man was overturned in the middle of the road and both he and his 16-year-old son had suffered serious head trauma. Despite the severity of the injuries and the impassability of the wreck, Ross-Ghazali didn’t simply pull to the shoulder and wait for help to arrive, she got out and attempted to stop what bleeding she could and spoke with the victims while emergency responders were on their way.

“She performed outstandingly,” said Winlock School Board Chair Fred Terry who, as a volunteer firefighter, was among the first responders to arrive at the scene. “It was pretty horrific. I was awfully proud of her.”

Terry presented Ross-Ghazali with a letter of commendation from Lewis County Fire District 15 during the Feb. 20 School Board meeting, as well as a certificate of appreciation from the Board.

“The victims were greatly comforted by the calm and reassuring way in which you spoke to them,” Terry read from the letter. “It is caring, understanding neighbors like you that make our community such a great place to call home.”

Ross-Ghazali was graciously quite during the presentation, except to say “Thank you” for the honors.

Terry remarked, “You’re welcome any time at the District if we have an opening.”

The victims of the crash were airlifted to Vancouver and have since survived their injuries, but the cause of the wreck is still under investigation by the Washington State Patrol. 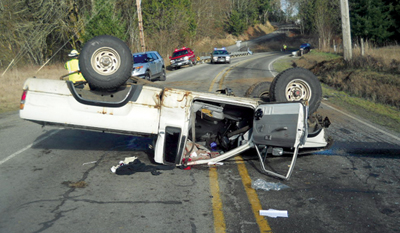 The 1996 Toyota 4x4 driven by a 49-year-old Winlock man on the 1100 block of Toledo-Vader Rd. The driver and his son, 16, of Winlock suffered severe head injuries and the cause of the wreck is still under investigation.