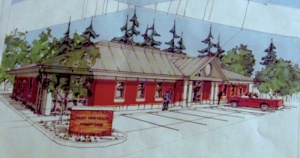 A conceptual drawing of the new Valley View Health Center Clinic planned to be built in Toledo by the end of the year. The clinic was one of multiple project discussed during vision:Toledo’s Big Town Meeting Thursday at Toledo Middle School.

Said Morgan, "It's our turn to re-invent Toledo."

Following introductions, Jeff Philbrook of the Toledo Lions Club presented a progress report on the Skate Board Park to be installed at Kemp Olson Park. A grant to cover plans (on display) was awarded to the project, and fund raising for the next phase outlined with community volunteers lauded for their contributions.

Juno Whittaker and Glenn Walker displayed the concept picture of the upcoming new Valley View Health Center planned for completion before the end of 2013 and provided a progress report detailing the permitting process with Toledo and Lewis County.

Washington State University School of Design generated the most interest, with their Rural Communities Design Initiative (RCDI) program. Established as a collaborative effort between WSU design disciplines and rural communities with populations less than 2000, RCDI promotes economic prosperity and has completed more than 20 projects in under-served areas of Washington, including Pe Ell in 2009 where the VFW Hall was updated into a community center.

Professors Robert Krikac, Interior Design, and Bob Scarfo, Landscape Design, presented a slideshow and heard audience feedback, then invited participants to break-out sessions guided by WSU graduate students. Reconvening in the lunchroom, the session notes summarized a gamut of revitalization ideas, from attracting more tourism to developing recreation in the area to upgrading the business district.

Before closing at 9 p.m., everyone was invited to bring their suggestions and enthusiasm to Friday's day-long workshop at the Morgan Arts Centre.

Krikac and Bob Scarfo again led the workshop while students fleshed out conceptual sketches of the ides discussed the night before. Working in teams, students and community members arrived at a handful of promising projects, including converting an abandoned alley into a park-like breezeway, refurbishing the City Hall block, creating a community area on the north side for a farmers market with improved parking, installing a gazebo at the boat launch ramp and park as well as landscaping upgrades at key areas along SR 505.

The students were commended by their professors and local residents at days end. This specific team will see students graduating this Spring, but Fall will bring the next RCDI group to Toledo where the next steps toward progress and growth will take place. 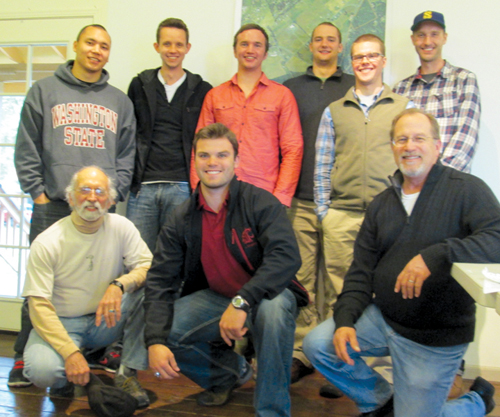 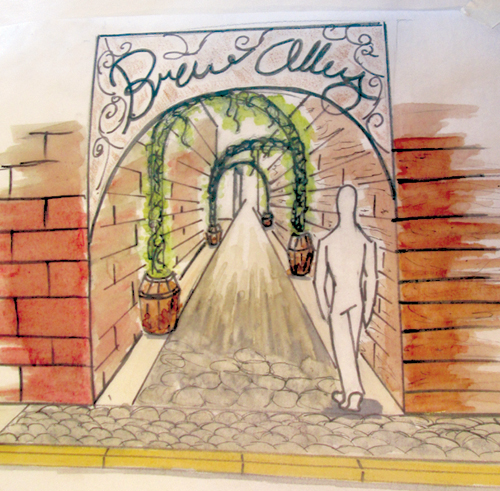 One of the conceptual sketches created by RDCI students during a workshop Friday at the Morgan Arts Centre. Community members pitched ideas for improving Toledo Thursday night and students brought them to life on paper, including this drawing by John Dingman and AJ Babauta of a potential "Bree Alley" between Timberland Bank and Nick Delin’s auction house.