Back the Blue moving forward 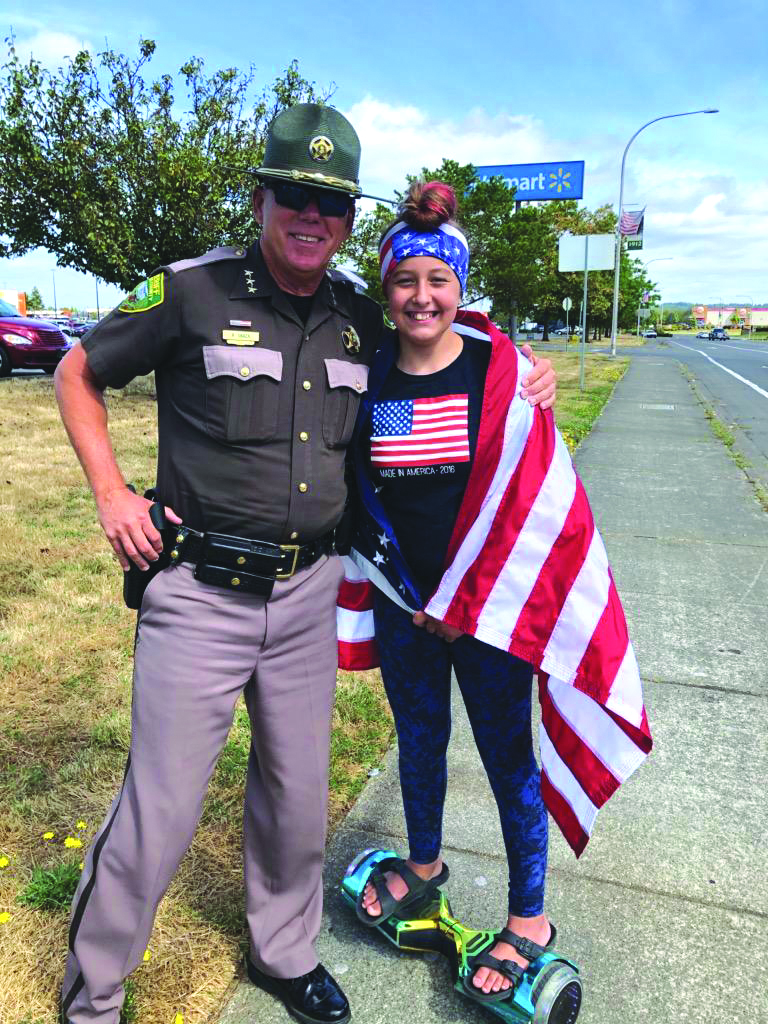 Sheriff Snaza and Gracie Miles join the Back the Blue Rally.

Back the Blue is an American activism campaign focused on building community support for our local police officers. The idea is to support your local first responders, not to defund them but to defend them. There is such a movement starting right here in Lewis County.

Just two weeks ago, a handful of people stood on the corner near Walmart and waived Back the Blue flags. This week, there were approximately 45 individuals present and the movement is growing every day. This event will be held every two weeks, as long as the organizers continue, it takes place next on September 12 at 11:00 a.m. The event brought out local citizens and public servants.

The person who is organizing the event, has asked to remain anonymous, she stated, "Our group shows support and appreciation for law enforcement and first responders. We want them to know how much the community truly cares for the tough jobs they are doing."

Sheriff Rob Snaza and his wife Jenny stopped by to visit with his supporters, he stated, "It was incredibly awesome and humbling to see so many people out supporting law enforcement. We are truly blessed to live in such a great community."

Candidate Lindsey Remund Pollock, who had attended the rally, stated, "In these difficult times, all good people can use a little extra encouragement. Please give our law enforcement officers a smile and wave, and when things get back to normal, consider going on a ride-along. We've got a lot of great people keeping us safe here in Lewis County!"

Barbara Swenson, a local resident stated, "I am doing this because I love this country. My Father was in World War II and I am going to fight for what he and I both believe in, it's all about the American flag. It's about the flag and freedom."

"I am here because I support the officers," said Gracie Miles, Age 11 from Adna. "The sheriff came to our house at Christmas, brought us presents and just chilled with us. If they get defunded, who are we going to call. I am here to make sure they don't get defunded." She was there with her family, her mom, sister, brother and friend, who wanted to show support.

Commissioner Edna Fund also attended the rally, she said, "Back the Blue 2 was even bigger than the inaugural flag waving event two weeks ago. Debbie, coordinator for Lewis County, is doing a great job of energizing our residents to honor the Blue. It was amazing to see the number of people honking their horns or giving high 5's as they passed the sign wavers."

Fund is correct, it is a group that is gaining momentum.

Serving the community in these times must be extremely difficult for some officers, they have been cursed at, spit on and objects thrown at them. It is time, we say "thank you" for all they do. Without our law enforcement, where would we be? Let's hope we never have to find out!