Ayoub looking to a better year 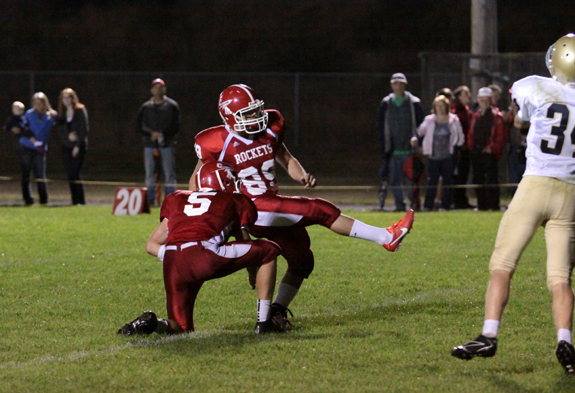 Castle Rock senior Darren Ayoub is currently the place kicker for the Rocket football team after an injury took a bite out of his high school athletic career last winter.

There are many high school athletes that find themselves in a challenge, but it is how they respond that makes the person they become.

Darren Ayoub is a senior at Castle Rock High School. He is currently the place kicker on the CR football team, but had and has much higher aspirations for this year in not just football, but also on the hardwood in a few months.

As a strong forward/post player for the Rocket basketball team last year, Ayoub tore his medial meniscus during an early season game. Not only did he miss the basketball season, he is currently limited to kicking duties when he would usually play a tight end position and be right in the thick of the Rocket offensive attack.

In a clear case of piling on, Ayoub lost his father to a battle with cancer in May.

"Tearing my ACL and losing my father definitely made me stronger," said Ayoub. "My father had always been my rock and my biggest sports fan. Losing him pushed me to work harder to make him proud."

Ayoub has made clear progress and worked hard just to be the kicker on the CR football team. He is not stopping there, however.

"Currently I am doing additional work after practice to hopefully be cleared to play tight end by mid season," he said.

How important are sports to Ayoub? He made no mention of activities that interest him that don't involve a lot of athletic movement.

"Sports have always been my favorite hobby," said Ayoub. "Other than sports I enjoy snowboarding, swimming, and doing outdoor activities."

While Ayoub appears to be strong and determined, he readily admits that he has had a lot of help along the way.

"My biggest fans and influences are my brother Phillip, my sister Miriam, my mom, and my teammates," described Ayoub.

He also lauds several teammates for going above and beyond to help him achieve his own goal of coming back for a successful, athletic senior year. He says Chase Lam, Dylan Libby, Luke Rahn, and Ty Johnson have certainly been there with encouragement.

"All of these guys have done workouts with me during the off-season to improve my game and speed up my recovery," he explained. "My three best friends Mikel Skreen, Jacob Rahn, and Cale Johnson have also been huge in helping me get over the loss of my father."

Before his final school year began, fate took one more friend away when Harlie DesArmo was hit by a car and killed in August.

Like many others at Castle Rock High School, Ayoub sees them as an audience. "I also know my father and friend Harlie are cheering me on in Heaven."

His dad also passed on another idea onto him.

"My father had sparked my interest in medicine," said Ayoub, who plans on attending University of Southern California or University of Washington to get a bachelors degree in cellular biology. In the end, I plan on becoming an orthopedic surgeon after graduating from medical school," he said.

First on the docket however, Ayoub is a full-time "running start" student at Lower Columbia Community College and then returns to Castle Rock each day to prepare for his final sports seasons as a high school athlete.