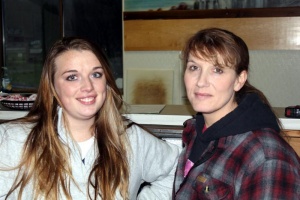 With the new permitting process from Weyerhaeuser starting this past August, to gain access to lands for a manner of activities, people are either not paying for the permits or deciding to venture into other areas to hunt, gather or recreate.

The new process is starting to impact local business's that have made their revenue from local hunters and woodland activities.

"We started to see an upswing after 2010, and were hoping that it would last," said Tara Bridges, operator of the Artic Tavern, located along Highway 101. Known for their steak nights, Taco Tuesdays and live entertainment, Bridges, and her daughter, Christina Rager, will have to refocus their efforts onto other matters.

This weekend the Tavern looks to say good-bye with visitors coming in from Raymond to Cosmopolis, some who have been customers in the past, others who have never visited, but will come to support the community.

Bridges,who was looking for a business venture nine years ago, acquired the lease of the Artic Tavern, and has seen it through some rough times.

"For the past few years we have seen a bit of an rise in business, but with the new permitting process, the hunters are just not coming through the area anymore. It was like a slap in the face," said Bridges.

"When I started, minimum wage was around $6, food prices were lower, there are many factors, but with this latest action by Weyerhaeuser, it is more than I can afford."

Looking to have the business last for her daughter, who is finishing up nursing school at Grays Harbor College, the mother, friend, and business operator is now looking to shut the doors on a facility that has been in the area since the beginning of the Artic community.

"I just can not afford to bankroll the Tavern anymore, which is what I have done for the past few months."

Owner of Artic Park, consisting of the Artic RV Park and Tavern, Roy Pearmain, had just returned from the warmer climate of the south and has seen the business change a few times under his ownership.

"For now, we might be looking at using the tavern space as a recreational room for the RV Park," said Pearmain.

The park closed for the winter, as per its normal schedule, will wait and see what might develop as far as a new operator or if it will be absorbed as an additional service building for those camping in the RV Park.

Catering to the visiting recreational crowd, hunters and the Artic Tavern Family, Bridges would also draw customers from the nearby recreational vehicle park, but it too has suffered low numbers of visitors in recent months.

"It just kills me to see the tears of my favorite patrons, who are just like family now, when I had to tell them my decision," noted Bridges on the Artic Tavern Facebook page.

A one-time employee of Weyerhaeuser for several years, Bridges found employment with Sierra-Pacific after she did not agree with some of the Weyerhaeuser policies and how they conducted business.

Born and raised in North River, her daughter Christina, who is finishing her studies at Grays Harbor College, Bridges is not sure what she will do with her free time.

"The focus for me is to see what I can salvage at this point. It would be nice to see someone come in who will be able to keep it going."

Every effort was put forth in trying to keep the Artic a viable option for consumers, including recent additions for an updated kitchen, running a variety of live entertainment, featuring weekly specials, and with just a family friendly atmosphere.

"It is mostly a family operation, I had a couple of people who helped out on the busier nights, but they have other jobs. It will be the regular customers that will be the hardest hit by our closing."

The new Weyerhaeuser permitting process looks to be even more far reaching with not only the Artic Tavern, but the adjacent RV Park as well has felt the dip in visitors. It is also rumored to be the cause that the Brooklyn Tavern has gone to reduced hours of operation. With the lack of hunters coming through the area and unemployment still not coming fast enough to make a significant difference, this is just the possible tip of the iceberg.

Artic, named for an 1890's postmaster Arta Saunders, is a story of local lore. It has been said that during the process of setting a post office in the area, paperwork was misread and instead of the town of Arta, it became the town of Artic.

The building once was also a gas station as well, and has been through much regeneration as a business. With the rural location, even if along the well traveled Highway 101 in the summer months, it is one local watering hole that will be missed by the Artic Tavern family.