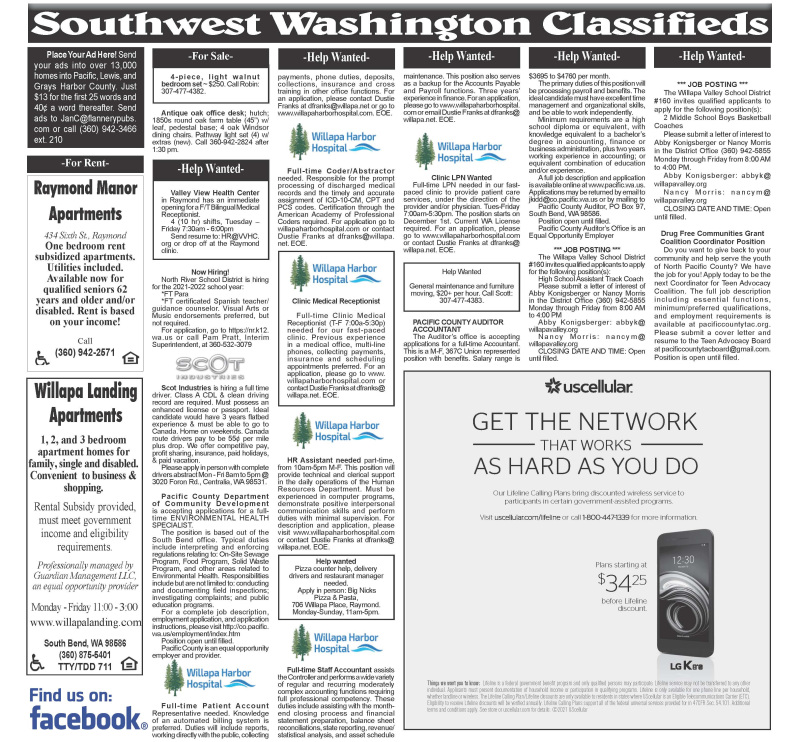 Inslee names Steve Hobbs Secretary of State; He replaces Kim Wyman, who has accepted a job with the Biden administration
Posted on:

Gov. Jay Inslee named Steve Hobbs as Washington Secretary of State last Wednesday. Hobbs replaces Kim Wyman who is vacating the position to take a role with the Biden administration.

The Washington Secretary of State preserves the integrity of elections in Washington state; safeguards vital government records, documents, publications and process; provides the business community and public with easy access to information about corporations and charities; and performs public outreach to improve civic knowledge and participation.

Hobbs, a native Washingtonian, grew up in Snohomish County where he still lives with his family. He has represented the 44th Legislative District in the state Senate since 2007. He currently serves as a Lieutenant Colonel in the Washington State National Guard.

Hobbs served for more than 32 years in the U.S. Army, serving in Kosovo and Iraq. He enlisted as a private and eventually worked his way up to Lt. Colonel.

"Steve is a dedicated public servant. He has a strong national security perspective from his work in the Army and National Guard," Inslee said. "His knowledge of cyber-security will be crucial as election systems around the country continue to face threats. Importantly, Steve has demonstrated political independence. That is crucial during this time of political polarization and distrust. He is a moderate who has worked effectively with people of all political perspectives. He is not afraid to challenge both Democrats and Republicans. Steve has worked to protect democracy and will continue that noble pursuit as Secretary of State." 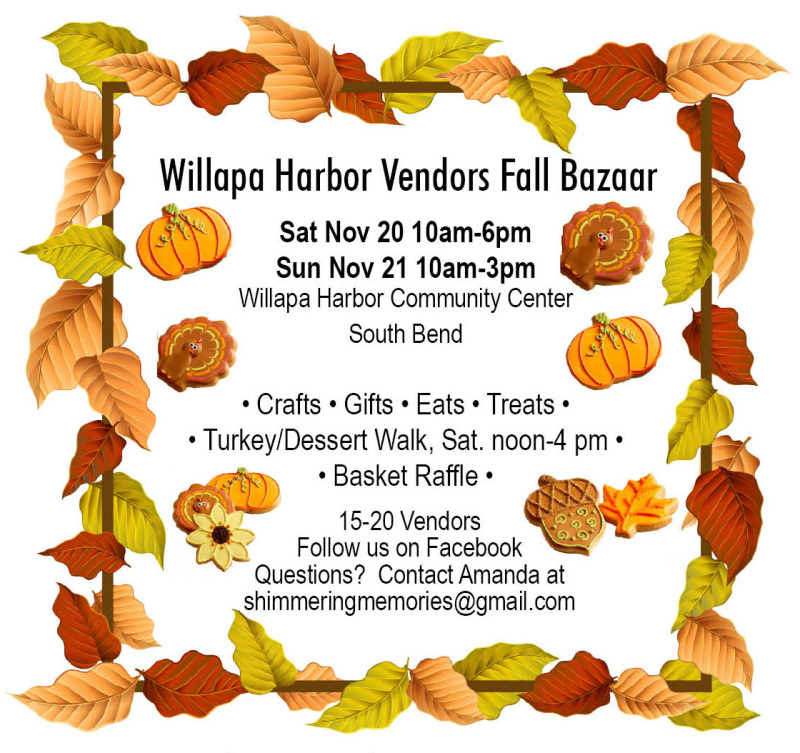 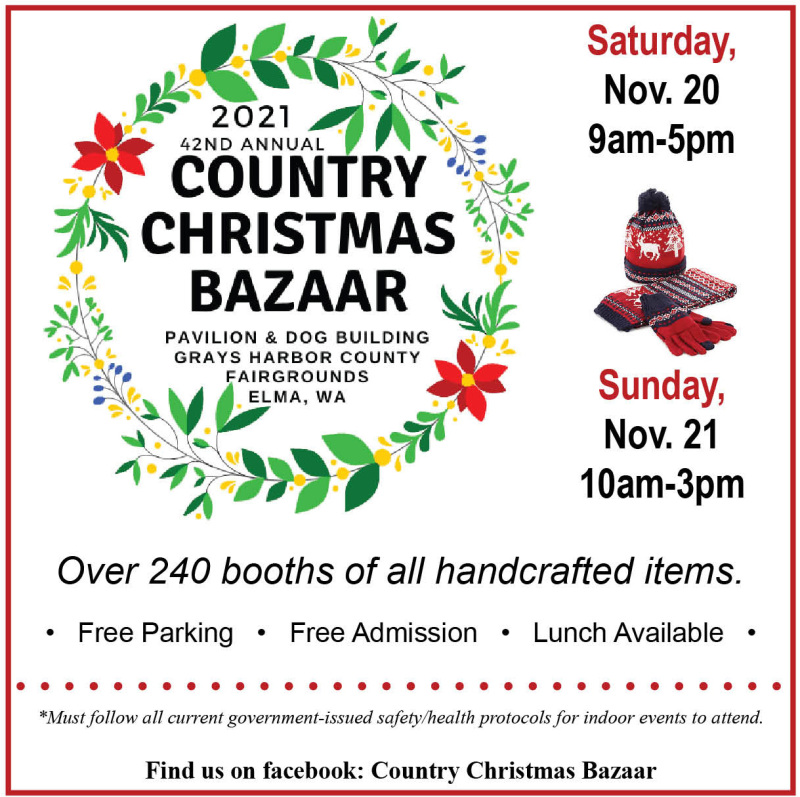 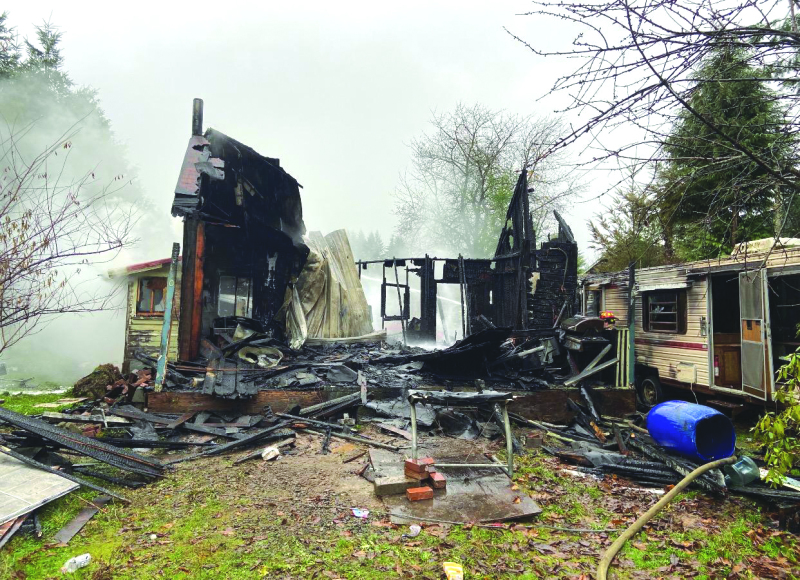 The remains of the house fire in Vader.
House fire burns in Vader
Posted on:

Friday in Vader was not a usual day, there was a house fire which drew a lot of attention. At approximately 11:02 a.m., members of the Cowlitz-Lewis Fire District #20 were dispatched to a reported structure fire at 810 E St. which is in the city limits of Vader. Initial reports from Central Dispatch advised that the residence was fully engulfed in flames. This was a home that had burned before in 2017. 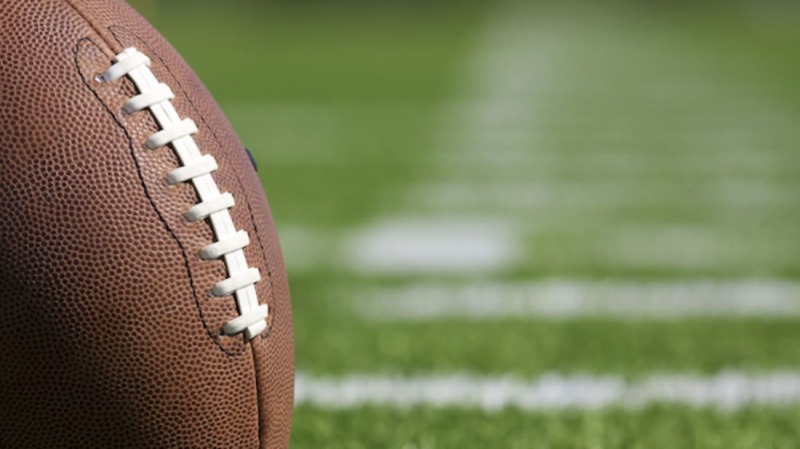 Congratulations to Winlock High School Football team for their win over Walla Walla - 64-60. They play November 20 in Quilcene - time to be determined. 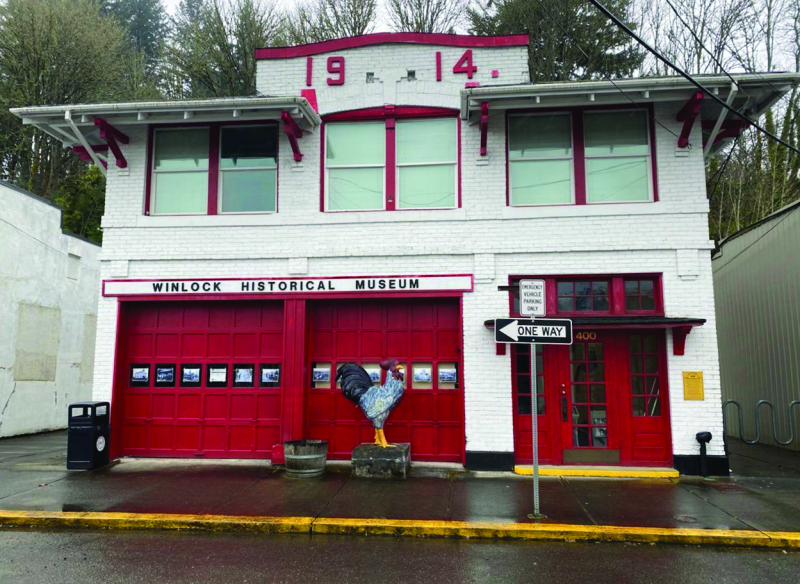 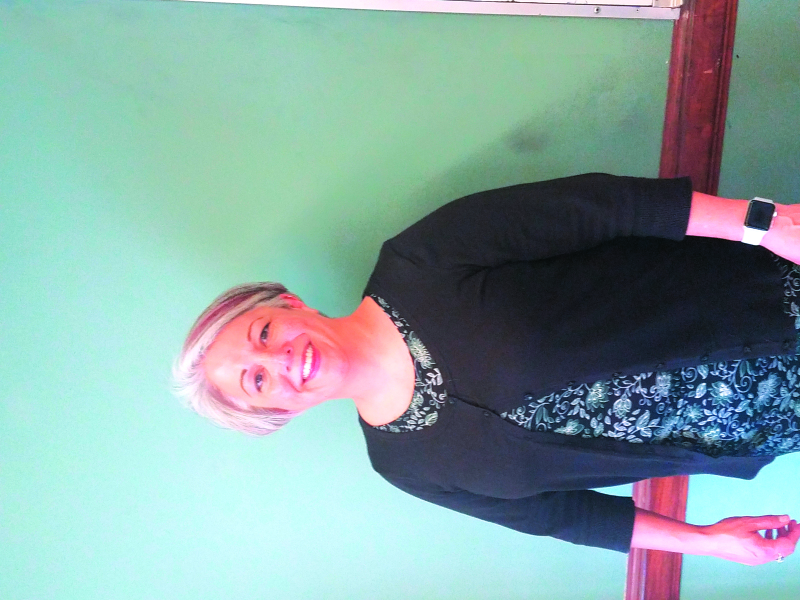 Like all violent crimes, serious crimes of any nature, drug abuse, domestic violence, etcetera, needs to be reduced significantly, and one way to start is with increased awareness and counseling for all parties involved. Domestic Violence Awareness needs to be ongoing. 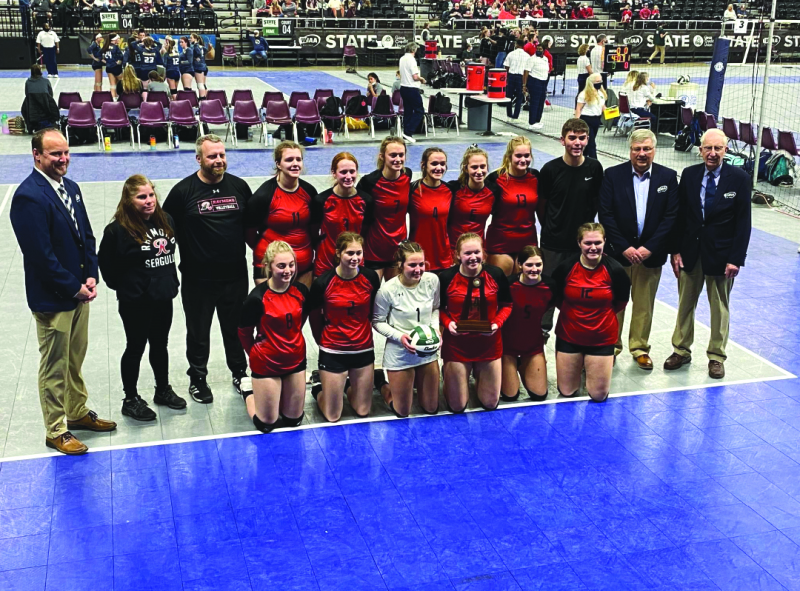 Raymond HS completed a wonderfully successful season by finishing fourth at the 2021 2B State Volleyball at the Yakima SunDome Friday afternoon under head coach Bob Swogger.

The Lady Seagulls lost a heartbreaking five-game match versus eventual runner up Walla Walla Academy Friday morning, and then dropped a match in three games against Manson for third place. 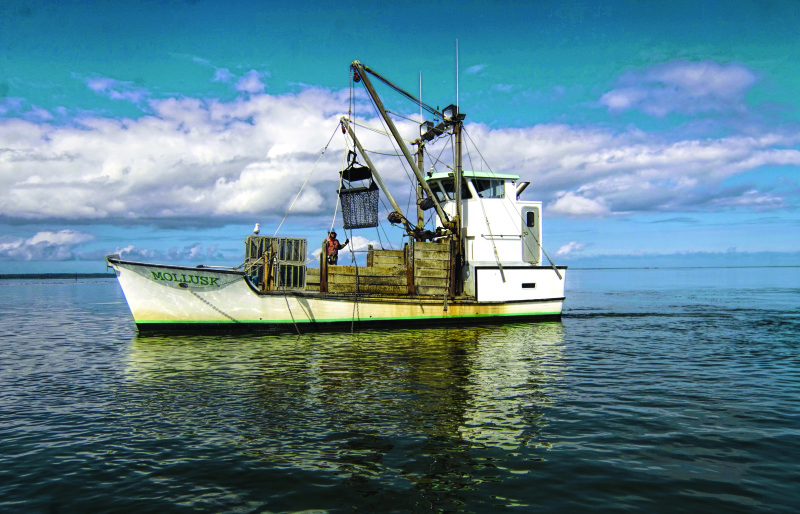 Photo by Marguerite Garth - The photo Harvesting Oysters is one of the three winning photo series.
Marguerite Garth earns world recognition
Posted on:
By:
By Karen S. Carter 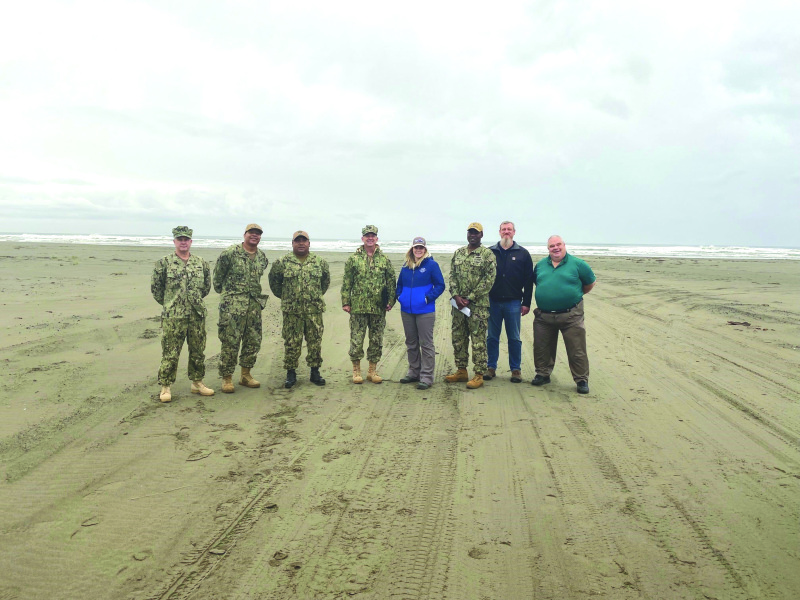 The US Third Fleet met with the Pacific County Emergency Management Agency to tour potential landing sites to use in case of a natural disaster. 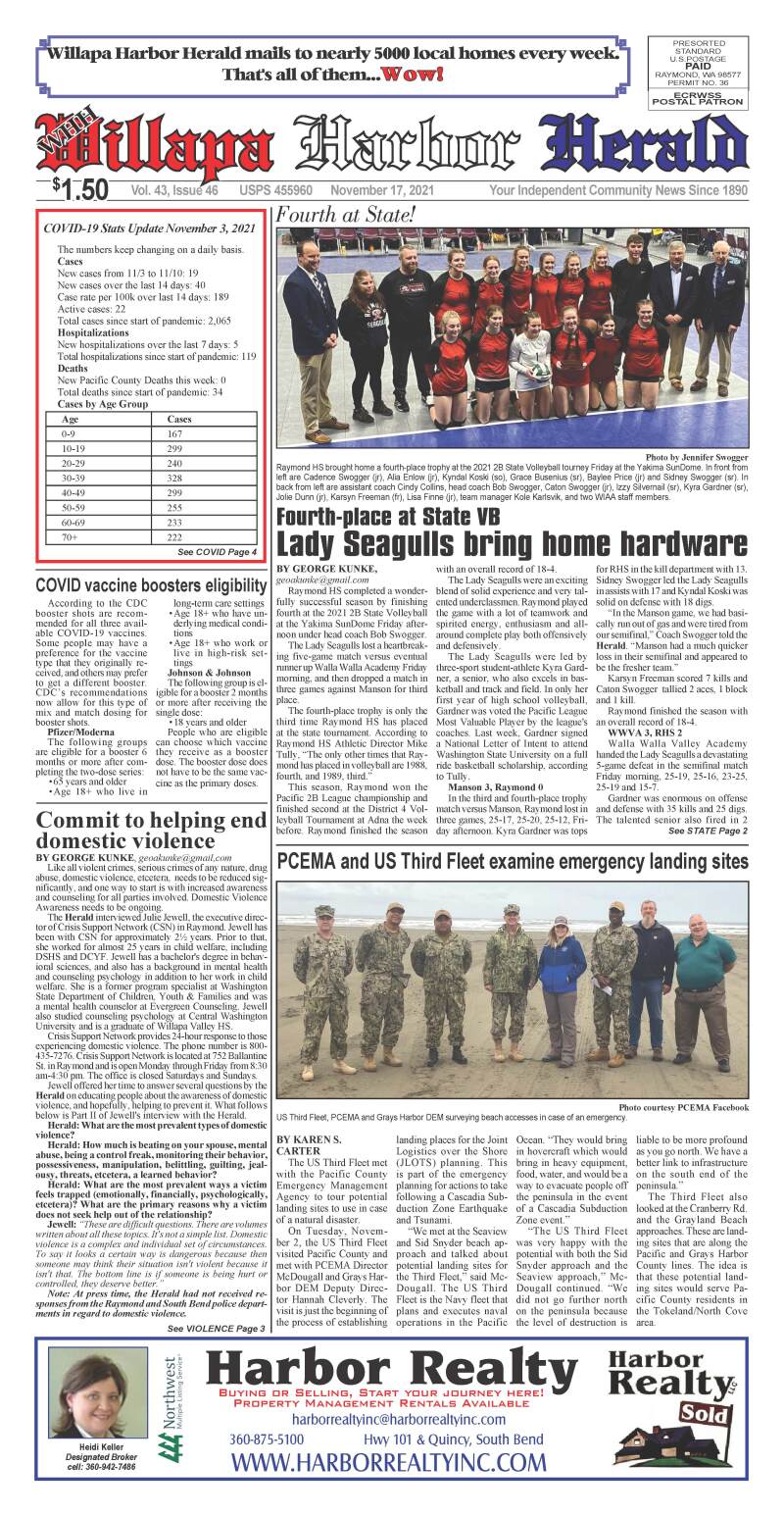 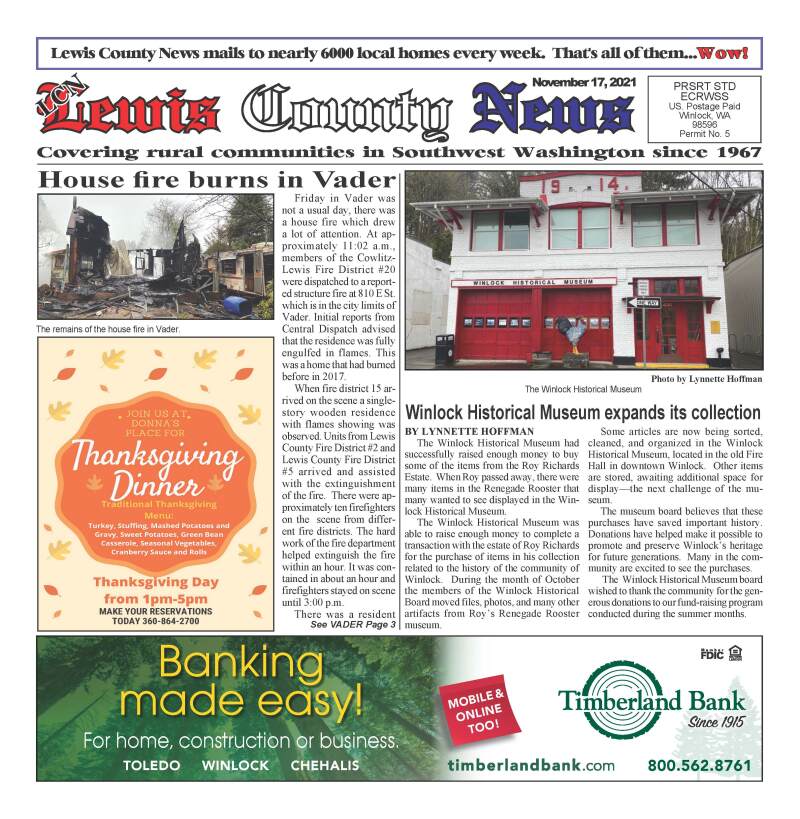