All around the state, people prepare for the Cascadia Quake and Tsunami 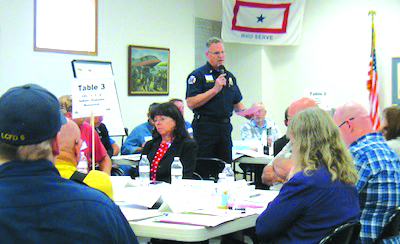 Representatives from emergency response, medical, government and police agencies met Wednesday to begin the planning process for an anticipated earthquake along the Cascadia Subduction Zone, predicted to cause catastrophic damage along the West Coast.

"We have plans for emergencies and disasters but we don't have plans for a catastrophic incident," said county Emergency Management Director Steve Mansfield. "This is the start of it, right now."

The exercise was presented in conjunction with the Cascadia Rising exercise, coordinated by the Federal Emergency Management Agency. Individual counties, such as Lewis County, organized their own events.

The Lewis County group met from 8 a.m. to 2 p.m. Wednesday, June 8th at the Veterans Memorial Museum in Chehalis.

Imagine a 6.1 magnitude earthquake shaking for 32 seconds and the damage it can cause. The Cascadia quake is expected to shake for anywhere up to or over five and a half minutes. Mansfield pointed to a large map. "What I want you to see here is, there's not going to be a lot of movement on I-5," he said. "People are not driving, but walking, if they're still alive."

The six-hour gathering in the upstairs meeting room of the Lewis County Veteran's Museum in Chehalis was the local portion of Washington State's Cascadia Rising earthquake and tsunami simulation exercise. It's meant to test local, state, tribal and federal government as well as select private sector and non-governmental organizations' ability to deal with such a situation.

Chehalis Fire Department Chief Ken Cardinale told the group what his agency saw in October 1989 around California's Bay Area. It measured between 6.9 and 7.2, he said.

There was 5 to 6 billion dollars in damage, 63 people were killed and more than 3,000 injured, Cardinale said. The Bay Bridge went down. The aftershocks were 4.0 to 5.0 in magnitude, he said. The quake is better known as the "World Series Earthquake" because it struck 30 minutes before Game 3 of the 1989 World Series. The Oakland Athletics and the San Francisco Giants were scheduled to start at 5:35 PM Pacific time and the earthquake hit at 5:04 PM.

The participants were seated at eight tables, each representing an area in the county imagined to be entirely cut off from other areas when a magnitude 9.0 earthquake strikes.

The scene: Buildings are in rubble, utilities are down, communications and transportation systems are critically impaired.

There is no Internet. People may or may not be able to use the text function on their cell phones.

Throughout the county, 1,200 people are dead, 2,460 individuals are seriously injured and 12,000 others are without shelter.

Each group was tasked with identifying its resources, building its team and developing action plans for the first 24-, 48- and 72-hour periods.

"What I kind of see is people going to their local fire stations," Napavine resident and candidate for Lewis County commissioner Bob Bozarth said at the table for the Centralia area. "They will, you're right," Riverside Fire Authority Chief Mike Kytta responded. "They're going to go there and to doctors' offices." "We don't have a local search and rescue team, so we're going to have to organize that," Kytta said.

At the Napavine table: "We're going to check on our neighbors."

At the Boistfort-Pe Ell-Curtis table: Boistfort and Pe Ell already have a supply of food and water for 100 people. "Water is paramount," Justin Phelps, public works employee for the town of Pe Ell says.

At times, the various groups shared with the entire room. From the Toledo-Winlock-Vader table: Mark Anders spoke about the strategy for finding people who need help. "You're going to go house to house, to the areas that are the easiest to get to first," he said. "To help the most people the quickest."

From the Salkum-Onalaska-Mossyrock table: The Mossyrock and Mayfield dams are built to withstand Morton area earthquakes and should be fine in this scenario, Tacoma Public Utilities employee Jayson Lelli said.

Nobody from TransAlta was present to speak to the strength and expectations of the Skookumchuck Dam. Former Lewis County Commissioner Ron Averill spoke up. "That's an earthen dam," he said. "If it breaks, Centralia will be under water to the Miracle Mile."

From the Chehalis table, Chief Cardinale: "One of the options we thought about for sheltering people, is we're fortunate to have RV sales places around here." he said. "Even if buildings are standing, with aftershocks, people are going to be afraid to go back in."

The imagined number of dead in Chehalis is 384. Lewis County Coroner Warren McLeod, on what to do with the bodies: "In the first hours, it's not an issue," McLeod told the group. "Our main concern would begin at the eighth hour." There's insects, then rodents, he said. "You'll begin to see mountain lions, bears and pack of dogs," he said. "Our plan is, they get buried where they are found," McLeod said. Specifically, McLeod said, to bury 200 people, it will take 400 square feet of space and moving 1,300 cubic yards of dirt.

Rationing limited resources will become a reality. No help can be expected from the outside for days, attendees were told. "Stores don't carry more than one to two days worth of supplies for their community," Mansfield said. "Ten years ago, that was different."

When help from the outside is mobilized, it will head first to the affected areas with the densest populations, such as Seattle and Tacoma, he said. "If you think the military is going to be here within the first 72 hours, you're wrong," he said.