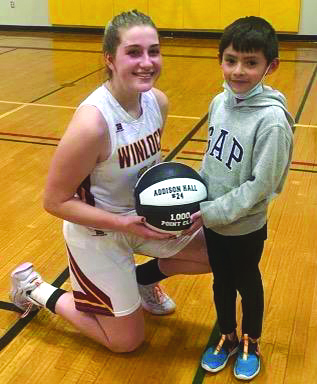 Addison Hall is a force to be reckoned with as well as admired both on and off the court. She was celebrated on Tuesday night, January 11, for earning over 1,000 points in her basketball career. Addison started playing basketball in 3rd grade. If you asked Addison why she decided to play basketball, she would tell you that it was "kind of" an expectation in her family that she play sports as her two brothers, Dawson and Logan did.

To Addison, the most exciting part about playing basketball is being part of a team and of course, "WINNING!"

When asked, what does it mean to score over 1,000 points? Addison replied with, "It is pretty rewarding. It's in the back of your head to get to 1,000 points. I've been keeping track through the years, but Coach Dracy McCoy and Athletic Director, Nick Bamer, told me I was edging the 1,000 point mark at the beginning of the season." She now has over 1,200 points.

Addison would like to thank her family and all of her coaches through the years from grade school to high school as well as her AAU coaches.

Addison excels in three sports plus is the ASB president while maintaining a 3.98 GPA. She has also played AAU basketball throughout high school, been the Community First Auto Center Athlete of the Week twice and the "WIAA Athlete of the Week."

After high school, Addison plans to attend Eastern Washington University majoring in the Sciences. She also plans to play as a walk-on with the basketball team.
Addison is the daughter of Randy and Traci Hall, whom Addison said were both very proud of her.

Addison is one of the most humble people I have met. She just stays involved and continues to give back to her school and community. She is to be admired.