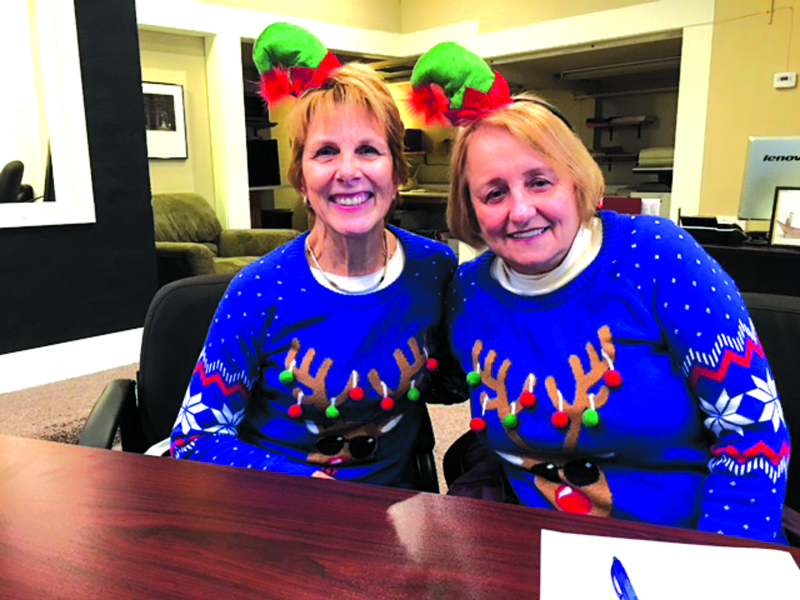 Event co-chairs Bette Worth, left, and Bobbi McCracken display their matching reindeer sweaters last week in the offices of the Aberdeen Revitalization Movement. An online ugly sweater contest is among the features of Aberdeen's first annual Winterfest.

Aberdeen's first ever Winterfest event is scheduled to be held Friday, Dec. 2, and Saturday, Dec. 3.

The event, which is described by organizers as a "festive holiday season-starter," is being organized by the Aberdeen Beautification Committee and the Aberdeen Revitalization Movement in conjunction with downtown merchants as a means of providing a holiday celebration for the benefit of the public, as well as to increase business and foot traffic in the downtown area.

Event co-chairs Bette Worth and Bobbi McCracken both also serve on the Aberdeen Beautification Committee, which partners with other local entities on the hanging flower basket program that runs May through September. They said the impetus for Winterfest came out of a desire to do something for the community during the winter months also.

"Our original vision was to have an ice-skating rink, and we were going to call that event Winterfest," explained Worth. "We were unsuccessful in raising the funds for the ice-skating rink, but we still wanted to do something to kick off the holiday season."

On the first Friday of every month a regular event is already held in which merchants stay open longer to promote community spirit and downtown shopping, and a December tree-lighting event has also traditionally been held at Zelasko Park.

In developing Winterfest, Worth and McCracken said organizers decided to expand upon these preexisting events, and so festivities will kick off starting at 5:30 p.m. on Friday, Dec. 2, with a tree lighting program at Zelasko Park. There, a trolley will bring in the Aberdeen High School Goldenaires and Harbor City Church Choir to perform. Hot cocoa and cookies will be on offer, and Santa himself will ride in atop a vintage fire truck. Following the tree-lighting, participants will disperse downtown.

"We're hoping people will go visit all the merchants, all the businesses," explained Worth, "and we decided to have a drawing where each business would provide some item, at no charge to them, and people could go in, look at the business, put in a ticket, and then there would be a drawing the next day."

"It could be as small as a gift certificate for a cup of coffee, or Selmers [Home Furnishing] has put in a recliner," McCracken added of the prizes to be drawn.

To further encourage participation, a number of Aberdeen restaurants will be offering either a ten percent discount or a Winterfest special to participants.

Bracelets will be issued at the tree lighting event so that Winterfest participants can be easily identified.

Also as part of Winterfest, on Saturday, Dec. 3, kids are invited to a breakfast at the D and R Theatre that is being sponsored by the Windermer Foundation.

Children sixth grade and under are free, and families can eat for a small donation. Santa will again be in attendance. Photos with Santa will cost $10, but proceeds will go to a Grays Harbor Community Hospital Auxiliary fundraising project to purchase stuffed animals for children who have undergone traumatic circumstances. Home Depot has also organized a kid's craft project for Saturday morning at the D and R.

"With this being our first year we have no idea how many people will come downtown Friday night or how many people plan on attending this breakfast on Saturday, but we'll see," Worth said.

"We're prepared for two to three hundred kids, but who knows," McCracken added. "We may have more, and we'll make it work."
McCracken went on to state that she's been pleasantly surprised by the response so far from the community, saying that virtually every business that organizers have spoken with has agreed to participate and put in a drawing item.

"They were excited that we were actually doing something to increase the foot traffic downtown," McCracken stated.

McCracken further noted that the event is in no way a money-making venture for organizers and is strictly meant to promote downtown activity and give people something fun to do around the holidays.

The pair said that though the event is only in its first year, it is intended as an annual one, and they're keen to get the word out through newspapers, radio, social media, and flyers that have been sent to all local school districts.

Worth observed that the area is depressed economically, something she said will only be fully remedied by the development of job-producing business and industry. However, in the meanwhile she and McCracken stated they hope that events like theirs can be of benefit to people living locally, while perhaps also capturing some tourist dollars as well.

"We want to show them that there is some pride and there is some life here in this community," Worth said in regard to area tourism.
Those interested can connect with both Winterfest and the Aberdeen Beautification Committee on Facebook.