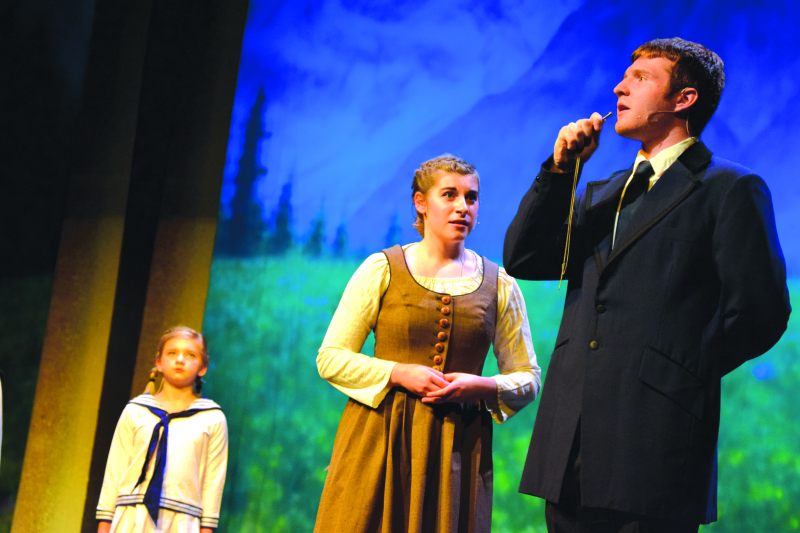 Aberdeen students conduct a dress rehearsal of "The Sound of Music" on Nov. 9. Performances are scheduled for Friday through Sunday this weekend.

Students with the Aberdeen School District began performances of "The Sound of Music" last weekend, and further performances are scheduled for this weekend on Nov. 18 and 19 at 7 p.m. and Nov. 20 at 2 p.m.

Tamara Helland, a counselor at Stevens Elementary who is in her fifth production as musical director with Aberdeen High School, spoke with the Herald in the midst of her cast's pre-rehearsal vocal warmups on Nov. 9, revealing that the classic Rodgers and Hammerstein musical wasn't necessarily her selection.
"Surprisingly my kids wanted to do it," Helland said. "I had kids that said, we should do 'The Sound of Music', and I was excited that they were excited about a classic show."

The cast Helland is working with ranges from elementary to high school students, with the youngest performer aged nine. She said that, among its many benefits, she believes that theatre can instill discipline and accountability in kids.

"Also it allows you to express yourself when you might be introverted; you might not be the smartest kid; you might not be athletic, but you love being on stage. If it instills any amount of passion, positivity, or self-discipline and self-regulation, that's great," she said, pausing to instruct performers to don their microphones and ready themselves for a full rehearsal.

Helland, who in addition to directing also serves as scene designer and choreographer, said one of the challenges is that the program is seasonal and therefore she doesn't have the opportunity to work with the students for as long as she might like.

"One of the most difficult things is Aberdeen High School at this point doesn't have a Drama class," she explained. "... We start right at the end of August, and then we put it all together and have only a short amount of time to perform at the end of November, so it all feels kind of crammed in ... There's just a lot of stuff that happens, and I would love to be able to teach more rather than just focus on an end product."

Asked about the differences between putting on a musical versus other kinds of dramatic performance, Helland said musicals tend to run long and can be very physically demanding.

Students, however, don't have to be natural extroverts or possess special talents to become involved in the program, Helland stated, explaining she takes all comers.

"Anybody who wants to give this a try and give their time, they're on our team," she said. "I really try to meet kids where they're at and try to encourage everybody to challenge themselves."

Mentioning several programs and venues besides AHS's, Helland stated she feels lucky to live in an area where there are places that offer live theatre. Helland further noted she's a proud supporter of the drama program at Hoquiam High School, with which she herself was involved for four years as a student.
Helland further added that she hopes the public will come out to support her students and take advantage of their performances.

"The best feeling is being able to fill an auditorium," Helland concluded. "I just really want everybody to be appreciative that we have these resources and we have these opportunities, and to come support kids who are challenging themselves by putting on an incredible show."

The performances are being held in the auditorium at AHS. Tickets are $10 for adults and $5 for kids and are available at the AHS front office, Harbor Drug in Hoquiam, Harbor Shoes in Aberdeen, and at the door prior to each show.