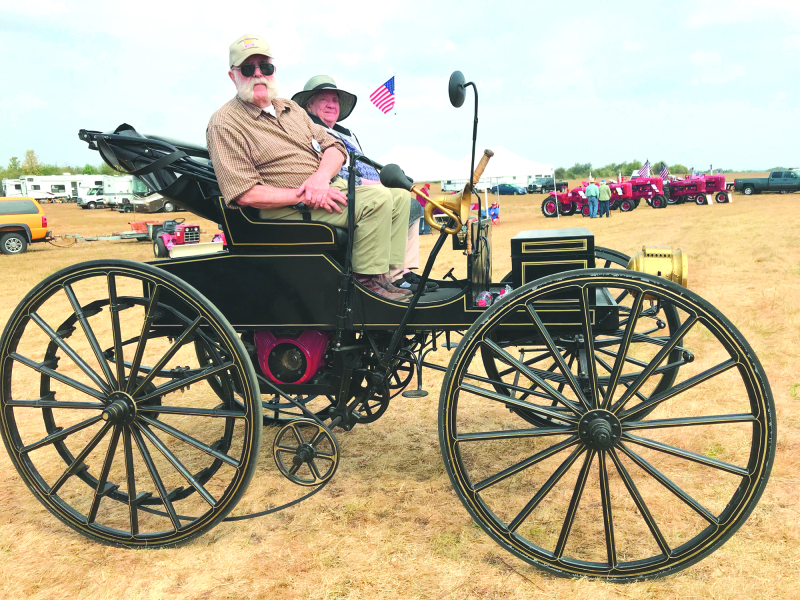 Photo by Cheri Mitchell - Lyle and Charlene Hegsted from Olympia show off their 1906 Holsman in their fifth year at the Threshing Bee. The Holsman has 2000 miles on it.

The 54th Threshing and Gas Show presented by the Cowlitz Prairie Grange was once again a huge success. People come from all over to see the different equipment from years gone by.

This year the 1906 Holsman made an appearance again, their 5th year. It is only one of 6500 made and has 2000 miles on it. Lyle and Charlene Hegsted from Olympia has been bringing it to the threshing bee for others to enjoy.

If you went, you also had the opportunity to see the water pumping fire engine that was used in the 1906 San Francisco earthquake. Since most of the water pipes were burst they had to pump water out of the ocean to help with the fires.

It's always a treat to see all the tractors for the tractor pull lined up, nothing but John Deere's all in line. Toledo is definitely a John Deere city with a few others thrown in there. The tractors remind us of all the hard work that has been done by farmers in our area for many years.

There was the swap meet with many things to purchase along with different vendors.

The local boy scouts were on hand to help many during the Threshing Bee as were individuals who have been there so many times before.

Once again, it went off without a hitch. All who attended were pleased, those who missed it will want to come again next year.