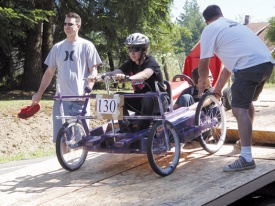 Racer Devon Schey (center), of Spokane, prepares to race down SR 506 in one of multiple experimental cars entered Saturday. These vehicles did not comply strictly with downhill derby rules, but were still able to compete in a separate division.

The 2013 Gravity Races in Vader saw a new category of vehicle: the experimental cars, which proved to be some of the flashiest and fastest cars of the day.

Classified separately from the regular racers because they do not meet specific downhill derby guidelines, the experimental cars came in a variety of shapes and sizes, including a lean, three-wheeled speedster built by Ryderwood resident Ray Finch.

Finch had built two cars for last year’s Gravity Races and, though he did not race himself, said the purpose had been to provide vehicles for kids who did not have access to their own but still wanted to race.

"I enjoy it, it was fun," he said, stating the thrill for him comes from both crafting the cars and letting the children use them. "Where else do you get to play kids again?"

Racing in experimental cars this year were youths Steven Barnes and Devon Schey, who were both given prizes for their participation.

Receiving prizes and awards for placing among the fastest in the regular youth races were Reese Gregg in first place followed by Wyatt Smith in second place and Zachary Smith in third. Placing for the adults were Ken Toven in first, Brandon Edson in second and Brad Richards in first.

A total of 10 individuals went racing down SR 506 this year—a little less than last year but not enough to deter a 2014 Gravity Races, according to event organizer Kevin Flynn. 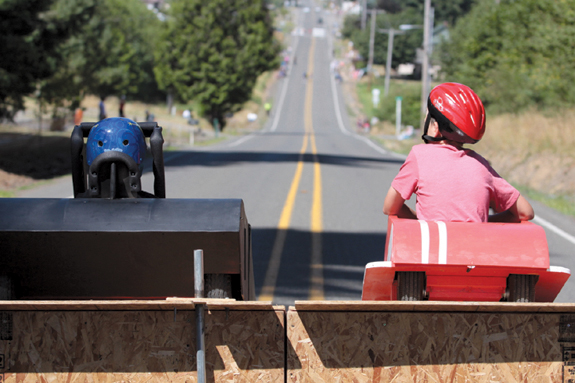 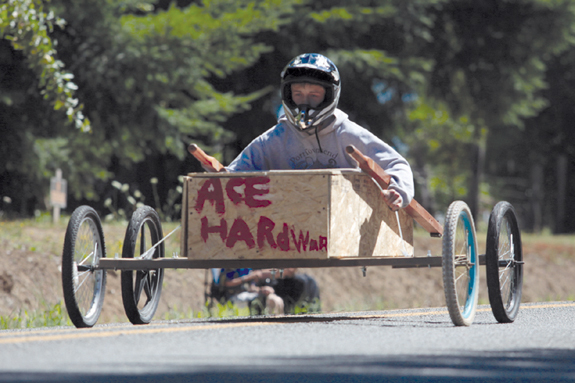 Steven Barnes of Winlock runs his experimental vehicle down the course at the Vader Gravity Races on Saturday. 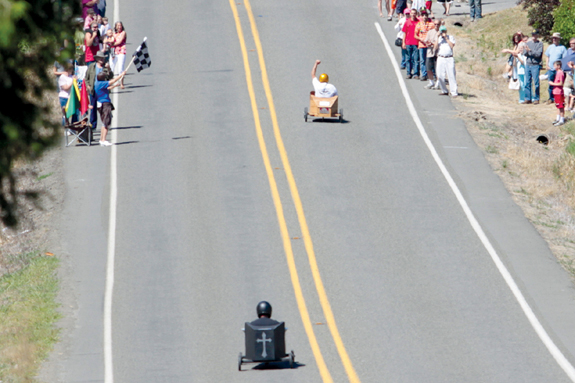 Ken Toven (wooden car), of Winlock celebrates his semi-final victory over Brandon Edson (black car), of Chehalis, as Toven crosses the finish line in what friends and family jokingly called a “grudge match.”