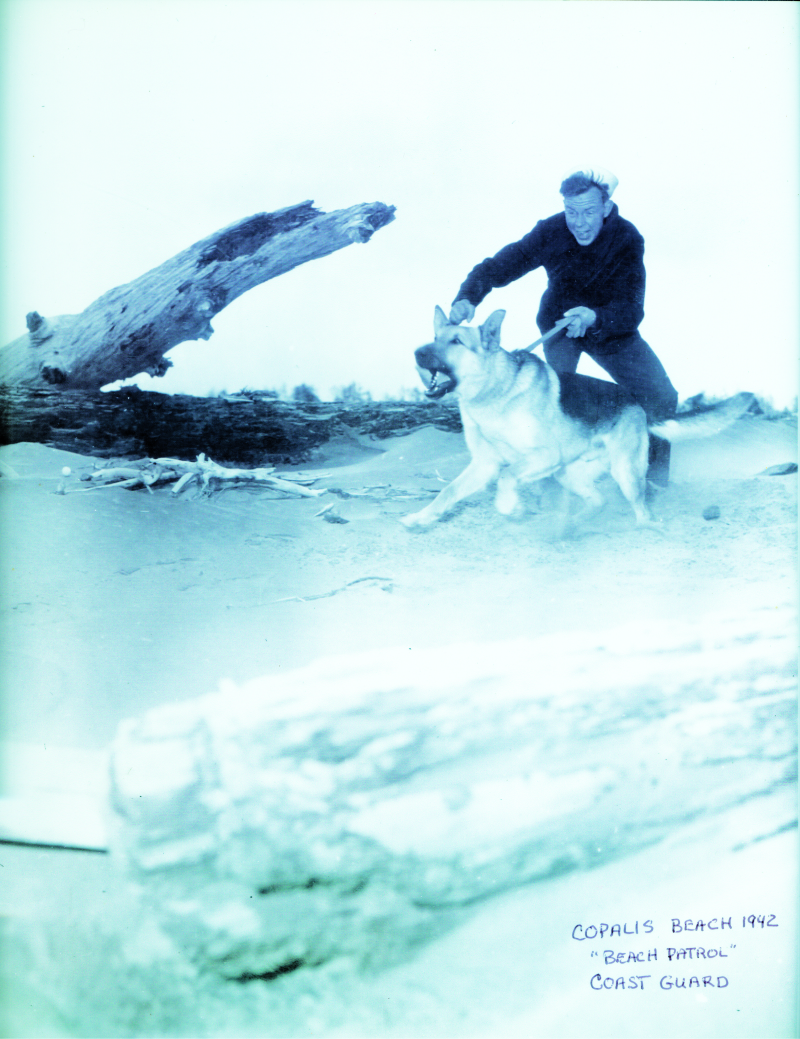 A member of the U.S. Coast Guard with his K9 patrolling Copalis Beach in 1942.

Due to the panic induced by the attack against Pearl Harbor on December 7, 1941, Americans on the west coast were so much in fear of another attack or even an invasion that a weather balloon that was seen over Los Angeles was targeted by anti aircraft efforts and rained hot metal debris down onto the city.

Americans were more paranoid than ever with the German U-Boats sinking merchant ships that were in sight off of the coast; the war was on the United States' doorstep. The United States Coast Guard led an important role to protect the nation during this period of uncertainty: to prevent enemy infiltration from the sea.

The basic structure for the United States Coast Guard patrolling the beaches was already in motion before Pearl Harbor was attacked, and as of February 3, 1941 all coastal areas of the United States were organized into defense divisions known as Naval Coastal Frontiers. The beach patrols were primarily security forces and had three specific functions:

1. To detect and observe enemy vessels operating in coastal waters and to transmit information on these craft to the appropriate Navy and Army commands.

2. To report attempts of landings by the enemy and to assist in preventing landings.

3. To prevent communication between persons on shore and the enemy at sea.

The patrols would also function as a rescue agency and would police the restriced areas of the coast as well.

The work of the U.S. Coast Guard beach patrol was not taken as seriously as it should have been, until the key occurance of June 1942. On the night of June 13 a German U-202 surfaced off the coast of Long Island, New York. Four Nazi agents were dropped on shore by a rubber raft, changed from their fatigues into civilian clothing and buried their fatigues. This was part of Operation Pastorious, a mission geared towards the destruction of U.S. factories and railroads.

Operation Pastorious aimed to create discord and cause panic to the American people as well as complicate tranportation. At the same time that the Germans had landed, 21 year old John Cullen, Seaman 2nd Class was on his six mile patrol from the Amagansett Station, and out of the fog, Cullen could see someone approaching him. When Cullen confronted the man, one of the freshly landed Germans, the man identified himself as a fisherman with his crew and that their boat had ran aground. Cullen heard some of the other men speaking what he thought sounded like German, and grew suspicious. Cullen suggested that the men come with him to the Coast Guard Station. The German officer then began to threaten Cullen, saying that he did not want to kill him and offering him $300 to forget that he had seen anything. Cullen accepted the money, given it was his only option to live, and took off running towards the Coast Guard Station as soon as he was out of sight.

When Cullen convinced people at the station what he was saying was true, they called to Warrant Offier Warren Baines, the commanding officer of the Amagansett Station. Cullen and three others were armed and the group returned to the scene of the encounter. The men did not see the Nazi agents, but could smell diesel fuel and hear an engine offshore. The U-202 that the German agents came in had run aground. To avoid taking fire, the men hid until the U-202 slid away. The men uncovered explosives and incendiary devices at the scene, and the lead German agent was caught by the FBI the next day.

As of July 25, 1942 the Coast Guard Headquarters authorized all Naval Districts that were adjacent to the coast to organize a well armed and maintained beach patrol, with proper communication equipment to relay messages. One of these bases situated at Copalis Beach for regular patrol, referenced in the picture containing the patrolmen with his patrol dog. Th Coast Guard's effort was not the only effort to protect the Pacific Northwests' coasts: field artillery units from Fort Lewis were deployed to Willapa and Grays Harbor, along with 60" searchlights, and railway mortars. This defense effort continued until July 31, 1942.