Winlock volunteers brave snow to help ‘Clean Up the Coop’ 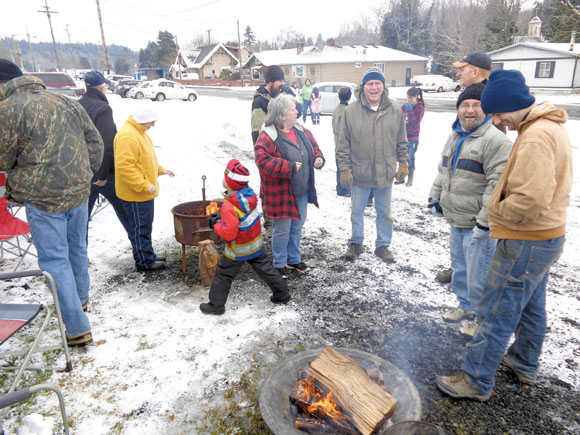 Volunteers gather at the Lions Club Event Plaza in Winlock Saturday morning for the first Clean Up the Coop event, despite significant levels of snow and temperatures hovering in the mid-30s. It was estimated around 40 individuals were on hand to help clean the city, with many coming from the Winlock Christian Fellowship as well as the LDS Church on Henriot Rd.

Around 40 volunteers turned out for the first Clean Up the Coop event Saturday in Winlock, despite freezing temperatures and a layer of snow throughout the city.

Organized by local business owners and community activists, Clean Up the Coop is expected to take place the second Saturday of every month for the foreseeable future, and is intended to beautify the town for the sake of its residents and those thinking of moving in.

“That’s the plan, whether permitting,” said group coordinator Viola Chickese, who said she felt the day had been a success, even if hard-working hands were feeling the cold. “I thought it went pretty smooth.”

Though some projects, such as cleaning road signs and sidewalks, were a no-go because of the weather, many landscaping jobs were tackled by the eager crowd, including the trimming of overgrown trees at Vern Zander Memorial Park (home of the World’s Largest Egg), the clearing of “old growth” (according to one volunteer) brush and brambles from the fence behind the post office, and the elimination of overgrowth from the vacant lot at the corner of Shannon St. and Front St. where a hotel used to stand.

Chickese had special praise for members of The Club tavern, who had spent Friday beginning to tackle the hefty project, as well as Paul’s Tree Service, of Toledo, who provided a wood chipper at no cost to volunteers. A number of local businesses have chipped in to help with cleanup efforts, and the group now has tools and equipment to call their own for the ongoing projects, as well as donated storage space.

Snow shoveling was also in order, with volunteers tackling the sidewalks along the main routes on town, many of them youths.

“I’m really excited about all the young people that showed,” said business owner Judy Costello, who is among the community leaders helping to plan the cleanup days.

Multiple families, young and old, had been on hand to help, many of whom were associated with the Christian Fellowship of Winlock and the local LDS Church, as well as the Winlock Lions Club. Representing City Hall were Mayor Lonnie J. Dowell and City Council Member Aaron Mummert, who spent most of their time down in the empty lot, helping clear brush.

Though it had originally been projected the work would end at around 2 p.m., most of the projects were already completed by the time lunch was served at noon (free chili dogs, compliments of Cedar Village IGA).

On the docket for the next cleanup day, scheduled for March 8, will be the sidewalks and signs volunteers were unable to tackle this time, as well as the repair and replacement of planters along First St. A meeting to plan the next cleanup day is scheduled for Feb. 25 at the Christian Fellowship of Winlock, and the public is welcome to attend. For more information, contact Chickese at (360) 785-0178 on Facebook under Winlock Clean-Up Project. 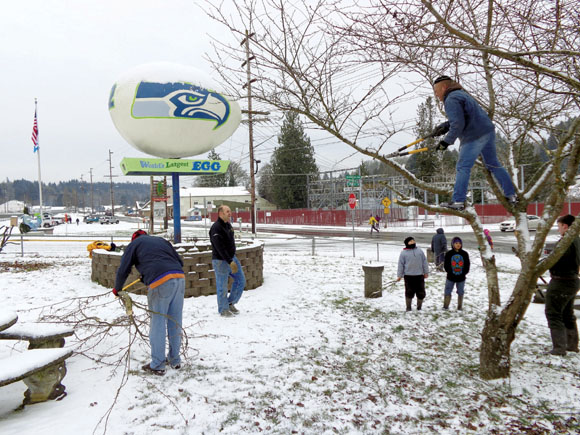 Vern Zander Memorial Park was a focal point for landscaping, where volunteers trimmed overgrown trees to make the park safer for children. 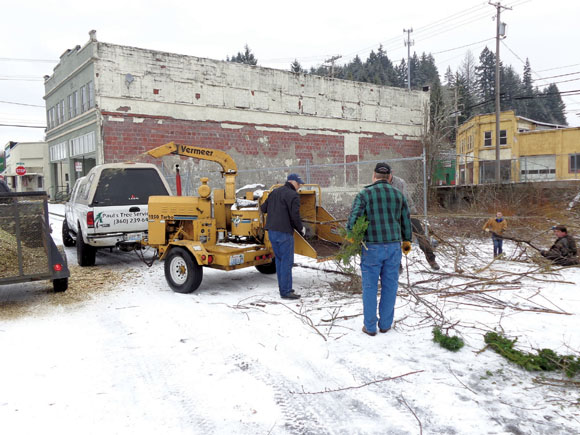 The donated services of a wood chipper, from Paul’s Tree Service, of Toledo, helped diminish the overgrowth in the vacant lot near the corner of Shannon St. and Front St. 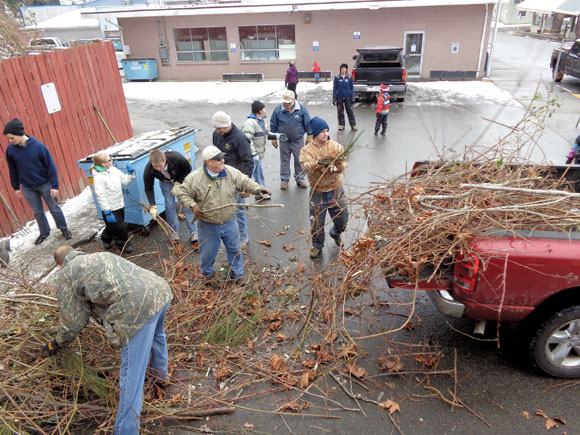 Brush and brambles, joking referred to as "old growth" by one volunteer, were removed from the fence behind the Winlock Post Office and hauled off to be chipped.