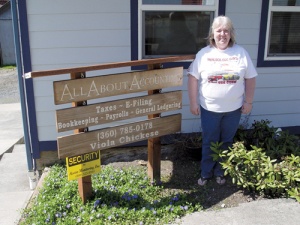 Viola Chickese, owner of All About Accounting, says Winlock's utility rates are causing her to consider moving her business out of town.

When tax season is over, Viola Chickese’s accounting business goes from bustling to bare, which she says is typical for May through December.

Most accountants try to balance out these lean times with a strong turnout of clients earlier in the year, but Chickese said this balancing act is getting tougher in Winlock due to the city’s high water and sewer rates, causing her to think about moving out of town.

"I have a toilet and a sink, and that’s it in this whole building," she said of her business, All About Accounting on 219 SE First St. "And I’m paying $287 every two months, and that’s a lot of money."

Winlock currently has the highest sewer and water rates in Lewis County at $137.64 per month for single-family residences and $143.15 per month for businesses, including all applicable fees and taxes. The Winlock City Council most recently voted to raise rates last September in light of increasing costs to operate the sewer plant, at which time officials stated the increase was an unavoidable necessity to keep the plant running.

Chickese spoke to the council March 11 and said the high rates have been forcing other businesses out of town, stating Winlock will be without a tax base if there is no commerce left.

Mayor Glen Cook replied all businesses, including his own, have been impacted by the rates, and acknowledged it does not seem fair to have current rate payers cover the losses experienced when other businesses and residents move out.

"The only thing the state allows us to do is get more people for revenue," he told Chickese that night, stating the city is not allowed to make exceptions due to a specific rate payer’s financial circumstances.

But last week, Chickese said she is still prepared to join the businesses that have moved out, stating she would be able to operate All About Accounting from her home without paying the high rates. While she is still trying to hold on to her storefront, another Winlock business owner, Jim Hammer of Farmer’s Insurance at 315 NE First St., has already begun identifying where he can move his business out of town to avoid paying the high utilities.

Hammer spoke to the council along with Chickese March 11, asking the council to reexamine their rate structure and suggested they consider charging per fixture instead of residential versus commercial rates.

"Right now, to pay more than a residential house, it is just not equitable," he said, stating he is paying more for one bathroom at his business than would a homeowner with multiple fixtures (bathrooms, a kitchen, exterior faucets) at their residence.

Officials replied, though they are not satisfied with current rates, the high cost of operating the sewer and water systems is the determining factor behind high utility rates.

"We have to deal with what we have," said Council Member Denise Green.

Hammer said Wednesday he has found locations still within South Lewis County that offer a storefront with a septic system, potentially reducing his annual business expenses by $1,600 per year should he move out of Winlock. While he said he would prefer not to move, as his office has been local for quite some time, too few people are coming to the area to justify remaining in town.

"There’s just not enough people coming downtown anymore," he said. "If they [city officials] want to attract businesses, they’ve got to do something to bring a little relief down here."

Cook has reasserted the city’s limitations regarding utility rate discounts, stating they are required to charge customers the same rates and can’t offer discounts to specific individuals or groups of individuals. But he added businesses, such as Corsicana Bedding, have still been moving to Winlock despite the high rates, and said the development of subdivisions this summer, such as Grand Prairie Mountain View Estates, are expected to bring an influx of hookup fees as well as more rate payers, which he said will help drive down the cost of utilities.