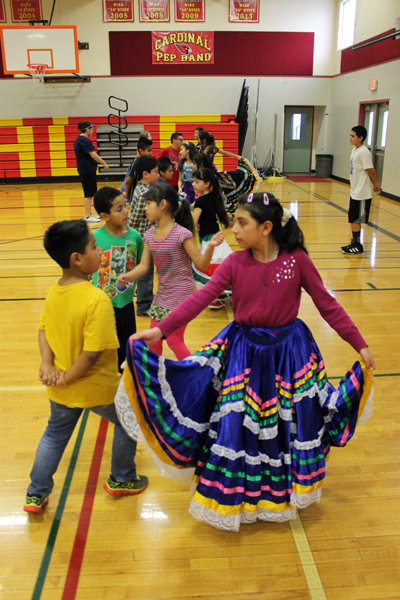 Students with Winlock's Mexico Within the Heart dance group practice for an upcoming performance during the National Migrant Education Program conference in Seattle next month. The group had been invited specifically by organizers of the conference, which seeks to help children of migrant families "overcome the obstacles inherent in their mobile lives," according to their website, www.nasdme.org.

The Winlock School District's Mexico Within the Heart dance group has announced they will be performing in Seattle next month for the National Migrant Education Program conference.

Scheduled for the weekend of March 22, conference organizers had specifically invited the students to perform, with group coordinator Rosie Luna stating this will be the first time her students have taken part in such a large-scale venue.

"It'll be really fun for the kids," said Luna of her dancers, which include 35 students from preschool to high school, all with different skill levels and cultural backgrounds. "I think it's just a great opportunity for them."

Luna said this is the largest level of participation her group has seen since starting a few years ago, as students have been encouraged to join as they perform more and more for audiences outside the district, adding she feels they are currently at capacity until more volunteers become available to help lead the groups.

For the program in Seattle, Luna said her students have begun practicing their routine earlier than they would have for the school year. Included will be dances representative of specific regions and cultural areas of Mexico, including dances from the state of Jalisco, considered one of the cultural centers of the country, as well as Chiapas, a mountainous and tropical area.

She added, when the students are able to perform at the conference, she hopes they can meet other groups and accomplished dancers to see what opportunities the traditional art of dance can bring to them.

"There is a lot they can get through dancing," she said.

To learn more about Mexico Within the Heart, including their upcoming local performances and how to invite them to an event, call Luna at (360) 520-3174.