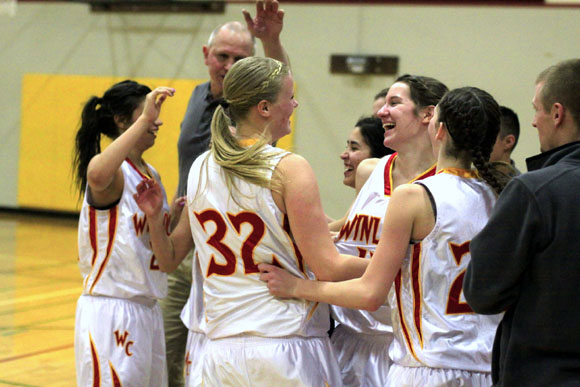 With smiles all around, Winlock seniors Cecelia Stalcup (#32) and Allison Wolf (right) along the rest of the Lady Cardinals celebrate a victory that clinches a trip to the District IV Tournament.

There are few better foes in the area than Onalaska, when it comes to crunch time for the Lady Cardinals basketball team. The Lady Loggers have been a long -time nemesis but, this year, Winlock got the best of them twice including a 45-39 victory last week.

Since, then, Winlock have dropped two games to highly-ranked Morton/White Pass and Pe Ell, but the Lady Cards have clinched the number seven seed from the Central League in the District IV Tournament against, most likely, Wahkiakum at 8 p.m. Wednesday at Rochester High School.

The playoff spot was deep in doubt on Feb. 4 as Onalaska had the Lady Cards down by as many as eleven points in the first half until the final moments of the game when Senior Jasmine Lopez began a shooting display that included three trays and a critical two pointer with 1:31 to go. She finished the game with 14 points while fellow senior Sydney Bradley added 10.

“It has been a while since I have been on fire like that,” said Lopez. “It felt good. It wasn't only me. It was my teammates too. I wouldn't have had the ball in my hands if it weren't for them.”

Next, Cecelia Stalcup played the role of enforcer and finisher as she scored the final four points of the game and ran off the floor in a pretty good mood.

“It feels great to know we are in post season! Being able to smile and hoot and holler after a game like that was an amazing feeling in the locker room,” said Stalcup after the game.

“She was catching balls that she hadn't caught all night,” said Head Coach Scott Ashmore. “They were harder than some of the ones that she was dropping. She was catching them and then she was finishing. She has had her two best games against Onalaska.”

A relieved Coach Ashmore said the answer came late, but at least it came.

“With six minutes to go we subbed in Dustee and I don't know who else. I was rollin' (the dice) trying to find anything because we just weren't clicking,” explained Ashmore.  “They turned it over and Lopez and Cecelia came up big.”

“As a team we played great in the 4th quarter and that what was needed,” agreed Stalcup.  “We had seniors step up on the court and put the ball in the basketball hoop. Jasmine did an amazing job.”

“Being able to finish with three layups and one being an and one felt good,” she said. “It got the crowd and team excited.”

Now the crowd will follow the team to Rochester on Wednesday night for their first District IV Tournament game. 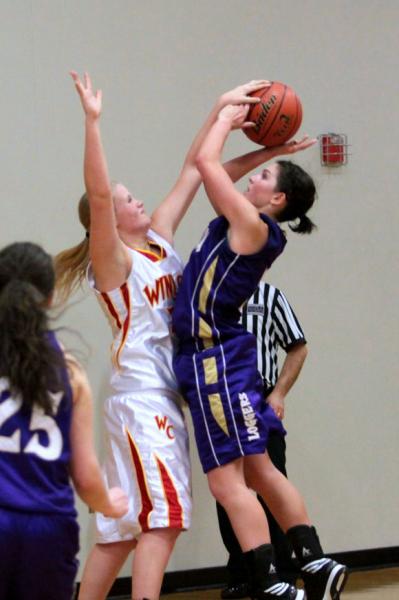 Winlock Senior Cecelia Stalcup has a defending hand on the ball against an Onalaska shooter.