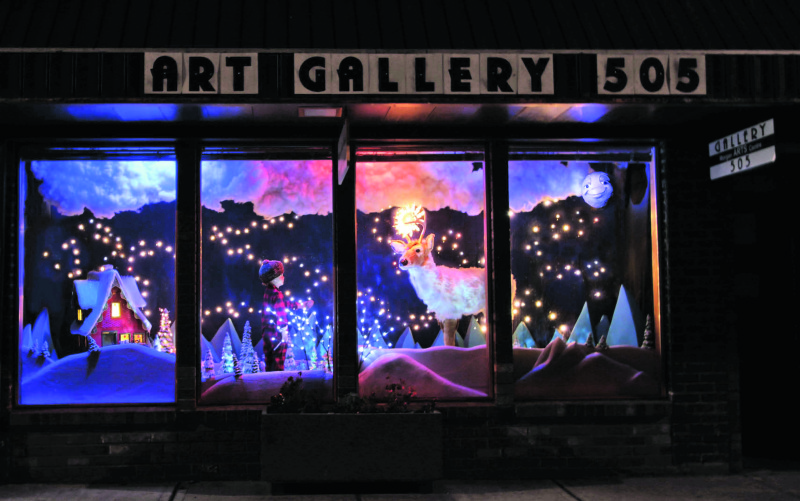 Celebrate the season with an evening stroll or drive to Toledo, Washington to experience Toledo's Art Gallery 505 holiday window display titled, "A Child's Dream of Christmas."

The tradition of visiting holiday window displays on a crisp evening outside of stores like Manhattan's Macy's is one of the hallmarks of big city holiday spirit throughout America. Well this year local area residents and visitors are in for a similar treat.

One needs only to visit the tiny town of Toledo to spark their childhood imagination by viewing Toledo's first ever, artist-designed holiday window display, "A Child's Dream of Christmas." From dusk until midnight, the special window transforms a bit of downtown.

According to Laura McGie, the producer on the special project, it all started with an inspiring question from Art Gallery 505 co-owner and artist Mike Morgan, "What if the small town of Toledo Washington had a holiday window display on par with those in New York City, only in a much smaller window?" Enter internationally recognized Portland Oregon-based film director and artist, Chel White.

When asked about the concept, Mr. White replies, "Of course the first question is, what will it be? I wanted it to feel like a child's dream and wanted it to be unique. I decided to avoid Santa, elves, nativity and such, leaning instead towards the unexpected." He adds,
"The whole concept really centers around the image of a young child who meets a mystical white deer. It's like looking into the mind of a child to witness a magical Christmas dream. For me, it captures a sense of spirituality, mystery in nature and most of all, imagination. That is my intention but ultimately it's one of those things that anyone who sees it should interpret in their own way."

"I was blown away that I could find my 'dream team' right here in Toledo," says Chel White. "Since Mike Morgan is an artist in his own right, I was able to rely heavily on him to successfully carry out the design." In addition to Morgan, White's dream team included construction contractor and woodworking artist, Kendall Richardson of Richardson Construction.

Mike Morgan says, "I was able to tap into my own creativity and had so much fun turning the Morgan Arts Centre into a bit of Santa's workshop preparing Chel's elements for the display. How often do you get to turn ordinary plywood into a magical night sky with hundreds of drilled holes to allow for the 'stars' to shine through?" Morgan adds.